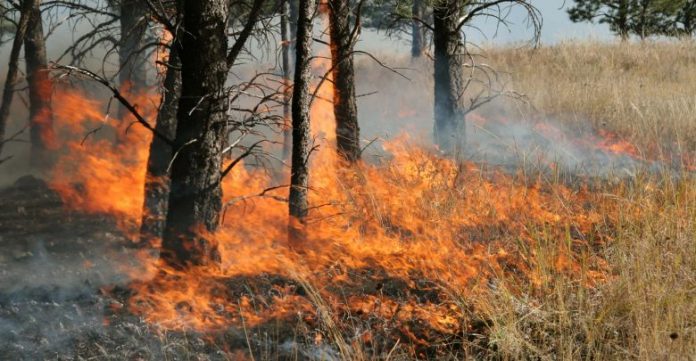 WANA: Hundreds of trees were reduced to ashes after a fire broke out in a forest in Kaniguram area in Ladha tehsil of South Waziristan tribal district on Saturday.

The cause of the fire could not be known and as to when it started. However, it is believed that some local people may have lit the fire to warm themselves, but it went out of control and spread to the entire forest. Some people in Pangay village noticed the fire in the morning. Local people said the fire flames and smoke were also seen from the nearby villages.

People of the area made hectic efforts to bring the fire under control. The Pakistan Army’s 55 Brigade also reached the jungle and helped in dousing the fire. The local volunteers led by Kashif Barki used large sticks to douse the fire. After hectic efforts of several hours, they managed to douse the fire but by then hundreds of trees worth millions of rupees were reduced to ashes.

Two people of a family lost their lives and four others were injured in a road accident in Batkhela on Saturday.

Local sources said a car travelling from Islamabad to Swat was hit by a dumper near Serai Khwar on Swat Expressway. Two people, identified as Awais Khan and his sister Saheema, lost their lives in the accident, while car driver Sajjad Khan, Ubaidur Rahman, Saeedur Rahman and Abdal, residents of Swat, sustained serious injuries.

The Levies personnel shifted the bodies and the injured to the hospital from where the injured were referred to Peshawar due to their critical condition.

The Levies impounded the dumper and filed a case. Driver of the dumper fled the scene after the accident.

Sources said Awais Khan had arrived from Saudi Arabia in Islamabad and the family members had gone there to receive him. However, they met the tragic accident while coming back to Swat.