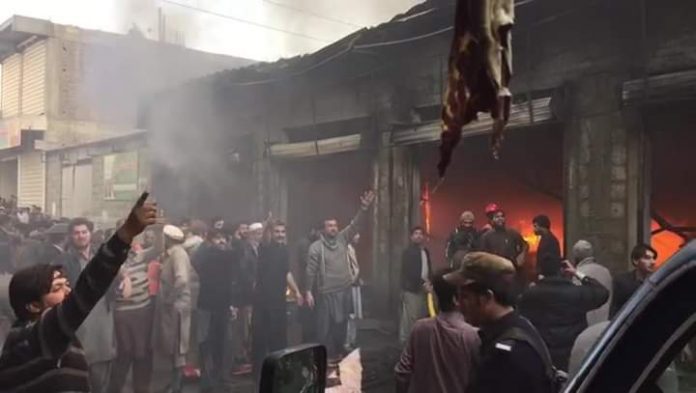 UPPER DIR: Fire erupted in a carpet market in Timergara area of Upper Dir on Thursday night which caused losses of millions of rupees.

Local sources said fire erupted in the carpet market due to electricity short circuit which completely damaged the shop of Muhammad Tayyeb near Sabaon Chowk. The Fire Brigade and local people arrived at the scene and doused the fire after hectic efforts. However, the shop was completely gutted and carpets worth millions of rupees were reduced to ashes.

Muhammad Tayyeb said the fire also damaged other shops and godowns in the Ittefaq Market. He claimed that carpets worth Rs10 million were reduced to ashes in the fire. He called upon the government to extend financial help to him to resurrect his business.

Several incidents of fire have been reported in different parts of Khyber Pakhtunkhwa during the last one month. Some of these incidents happened due to electricity short circuit, while others due to gas leakage.

On Monday night, three shops were gutted when fire erupted in a market on the Bypass Road in Chitral.

Local sources said fire erupted in the shops which completely damaged three shops and goods worth millions of rupees were reduced to ashes. Shakeel, owner of a damaged shop, said while talking to TNN that fire erupted in the shops due to electricity short circuit after which he immediately informed the fire extinguishers, but they did not act in time due to which all goods in his shop were reduced to ashes.

On 29 December, two houses were burnt when fire erupted in Hatan Darra area of Upper Dir due to unknown reasons.

Local sources said fire erupted due to unknown reasons due to which three-storey house of Shahi Malik having 15 rooms was damaged. The house of Munawar having five rooms was also damaged in the fire. The area people said they tried to douse the fire on self-help basis, but the flames were so strong that they were unable to go near to the burning houses.

On 25 December, three people lost their lives and as many were injured in two gas-related mishaps in Nowshera.

On 8 December, fire broke out in the remote Atrango Tangi village of Upper Dir that reduced about 20 houses to ashes.