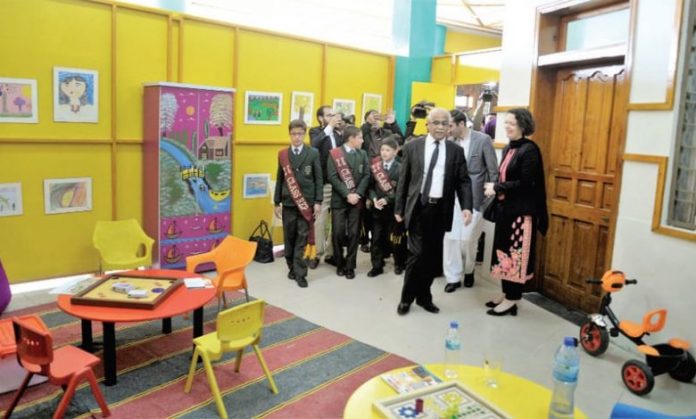 Chief Justice Peshawar High Court (PHC) Justice Waqar Ahmed Seth will formally inaugurate the court today (Saturday). According to a press release issued from the office of district and sessions judge of Mohmand tribal district, the child protection court has been established in the district which will be first such court in merged tribal districts.

The chief justice of the PHC will inaugurate the project.

Approval was given for appointment of judges for the child protection courts.

The inauguration ceremony was held at the court of Mardan district and sessions judge. Besides the PHC chief justice, Registrar Wajihuddin, British High Commission representative and other officials were also present on the occasion.

Wajihuddin said on the occasion that second child court has been set up in Mardan after Peshawar under the Juvenile Act 2018. He said the PHC chief justice will also inaugurate a child court in Abbottabad. He said 67 cases have already arrived in the child court.

Several incidents of children’s abuse have been reported recently from KP. In some cases, the children were killed after sexual abuse. These incidents created unrest and fear among the people. Now the establishment of child courts in KP will provide relief to the families of such victims.

The first child court of KP was established in Peshawar in March last year.

Children-friendly atmosphere has also been created in the child courts by displaying paintings, carrom boards and ludo for the children in the child courts. The courts have been prepared and renovated as child friendly places. Under the law, child courts are handling issues related to child protection and welfare, particularly legal custody of the destitute and neglected children.

The Child Protection Act 2010 bounds the provincial government to set up child protection courts in every district of the province.