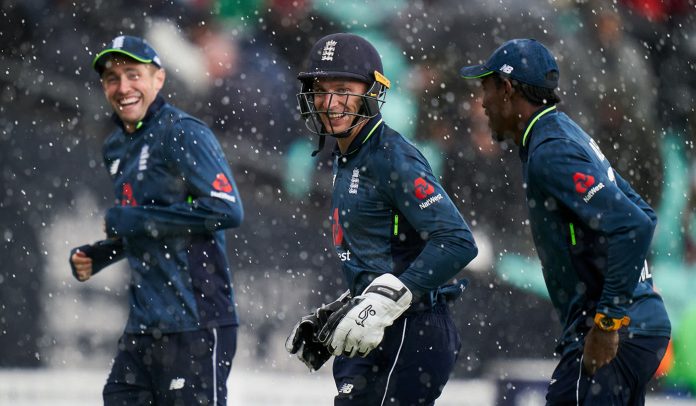 PESHAWAR: The first match of the five-match one-day international series between Pakistan and England at The Oval was abandoned after heavy rain on Wednesday night.

England after winning the toss decided to field first keeping in view the damp conditions. The start was delayed by over an hour due to rain. Pakistan had a jittery start to the inning as Fakhar Zaman fell for just three runs after edging to Joe Root in the slips. He was followed by Babar Azam who fell for 16 after edging Liam Plunkett to wicket-keeper Jos Buttler.

Imamul Haq rediscovered his composure and was playing on 42 along with Haris Sohail who was playing on 14 when the rain stopped play and it did not resume. At that time, Pakistan’s score was 80 for the loss of two wickets in 19 overs. It could have been 80 for 3, but Jos Buttler missed a regulation stumping on the last ball of 19th over as Haris Sohail came forward to play Adil Rashid and missed it completely. England were looking dominant in the game as they had Pakistani batsmen under their control.

Jofra Archer continued to impress with the ball as he fired a hostile opening spell against Pakistan before the arrival of rain. Archer conceded just six runs in four overs in a wicket-taking spell. Cricket experts say Archer has put a strong case for selection in the World Cup. Archer also showed brilliant performance in the only T20 game against Pakistan which England won.

There were several rain interruptions in the 19 overs’ cricket and ultimately the umpires ended the game as the weather prospects were not very encouraging. However, other bowlers also bowled well and deciding the final bowling attack will be a tricky job for the England selectors.

For Pakistan, the equation remains the same, i.e. their batsmen will have to step up to increase their chances of better show in the mega event. In Wednesday’s match, they had a good fight and were put to test by the England bowlers, but rain played the spoilsport.

The second match of the series will be played at Southampton on Saturday.