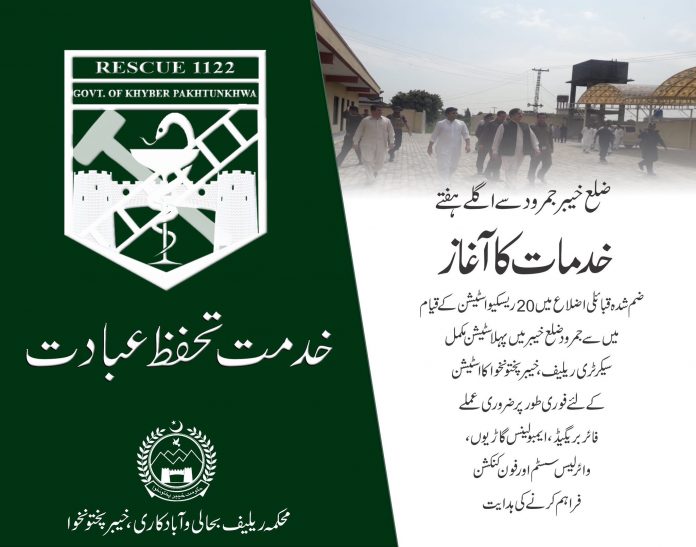 It will be the first rescue station in tribal districts after its merger with the province through a constitutional amendment. The KP government has started construction work at rescue 1122 station in Jamrud tehsil after the government decided to extend rescue 1122 to the tribal belt.

The director-general relief Abid Majeed has visited the station on Monday and ordered the immediate transfer of machinery, telephones lines, fire brigades, ambulances and wireless system to the station to make it functional without any delay. The Secretary relief has said that a total of 20 stations will be established in different tehsils that will provide support to tribal people in emergencies.

The secretary relief was also accompanied by the director-general of KP rescue 1122 where both officials were briefed about the plan of extending the Rescue 1122 service to newly merged districts.

The Secretary relief also visited the proposed site for the construction of another rescue station in Tehsil Bara of Khyber district. The site has been selected in Bazar area of Bara Tehsil. The Secretary relief orders the immediate start of work on the new station.

PESHAWAR: KP government has inducted 50 new nurses in Lady Reading Hospital (LRH) on Tuesday where the total number of nurses has now reached 800. The acting director of nurses LRH hospital Zaifa Gul said that nurses playing a very vital role in providing proper healthcare to patients in the hospital.

He added the government is taking all possible steps to fulfil the deficiency of staff in the hospital. Dr Sulaiman Khan associated director of the hospital said that LRH is the only hospital where skill lab has been established for the proper training of nurses.