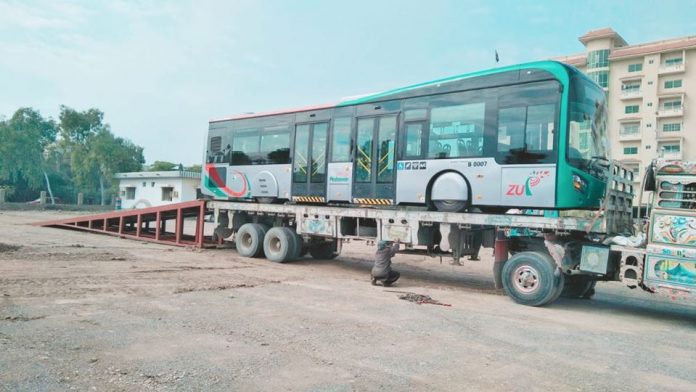 PESHAWAR: The first shipment of 20 buses for Bus Rapid Transport Project finally reached the city from Karachi on Wednesday. The buses were transported from China via sea-port and then were trucked to Peshawar via road.

A total of 220 buses will be purchased by the TransPeshawar to ply on BRT routes. Out of these, 155 are 12-meter-long while 65 are 18-meter-long buses. The current lot of buses comprised of 12-meter-long with the capacity to accommodate 75 passengers each. These buses will be wifi-enabled with AVL (Automatic Vehicle Location) facility – a feature to track the real-time location of the bus.

The TransPeshawar officials said that it is the first buses in the country that are hybrid and can run on diesel as well as electric. “These buses are also environment-friendly and would reduce Carbon emission in the city,” claimed the officials.

According to a careful estimate by the Asian Development Bank (ADP) the Peshawar BRT, once implemented, will reduce 31000 tons of Carbon emissions when compared to the existing transport system of Peshawar.

TransPeshawar communication officer Noman Manzoor said that a significant feature of BRT bus is UAS – Universal Access System, which is one of the key factors used to globally rate/ evaluate BRT systems. He added that the buses are low floor having ramps for wheelchairs to handle people with disabilities while the low-floored buses will also ensure easy access of senior citizen.

In mid of last year, a prototype (demo) bus was brought in Peshawar, for testing the local environment, weather conditions and other accessibility features. The feedback gathered was thus incorporated in a new lot of buses.

As per the feedback of local associations of differently-abled people, additional seat belts have been added as per the ISO standards. Also, all hinges/ hurdles of the bus ramps are adjusted to smoothen the access of wheelchairs till the passenger reaches designated stop.

As per the cultural needs of the region, said Manzoor, the buses also have a separate section for women as well as priority seats. During the initial testing with local female riders, few of women suggested to increase the length of grab rails and handles, which have now been incorporated and adjusted as per the height of female passengers in the city, in addition to adjusting some cramped leg spaces.