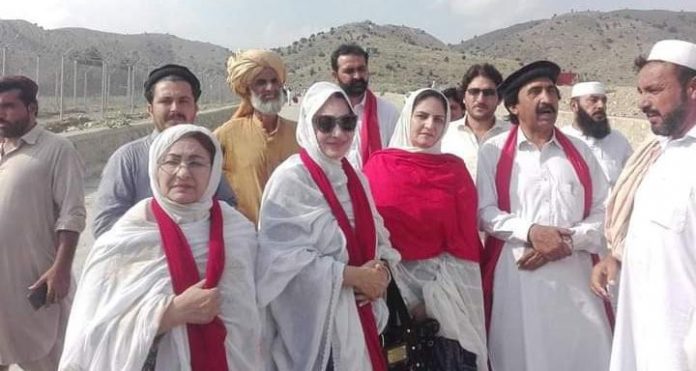 The delegation then visited Ghulam Khan border where they were briefed about the border operations by the ANP general secretary Abdul Khaleel.

The ANP leader called for repatriation of all the temporarily displaced persons (TDPs) in Bakakhel Camp, Golnay Camp and other districts without further delay. She said all the vehicles and other luggage of TDPs must also be allowed to be brought back to North Waziristan. She said those who suffered damages due to Operation Zarb-e-Azb must be compensated and survey of leftover areas must be initiated soon. She said payment of timely compensation to the owners of lands and traders must be ensured.

Shazia Aurangzeb demanded reopening of Ghulam Khan border fully for trade activities as the two-way trade will boost the economy of the country.

The ANP leader criticised the incumbent Pakistan Tehreek-e-Insaf (PTI) government and accused it of complete failure. She said the ANP is the party of martyrs and ghazis which took principled stance against terrorism. She said the peaceful environment in Khyber Pakhtunkhwa is because of the sacrifices of ANP. She said the ANP followers gave countless sacrifices for the country and will never hesitate to offer more sacrifices in future if the country needed.