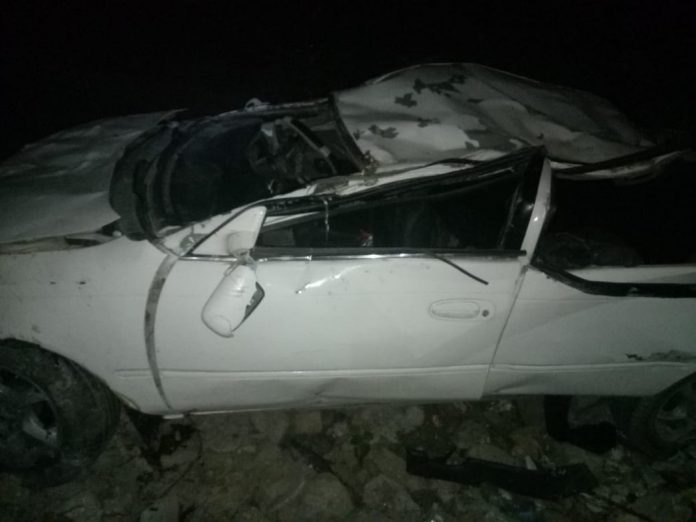 ABBOTTABAD: Five people including, women and children, lost their lives when a car plunged into a ravine in Abbottabad on Friday night.

Police said a family hailing from Khwazakhela area of Swat was travelling back from Nathiagali to Abbottabad in a car when it went out of driver’s control and fell into a deep ravine in Kali Mitti area near Harnoi while negotiating a sharp turn due to over speeding. Police and rescue teams immediately reached the spot and started rescue operation during which bodies of two children and two women were recovered while three injured persons were taken to hospital. One of the injured persons succumbed to injuries in the hospital due to which the death toll mounted to five.

Hospital sources said the condition of the remaining two injured was out of danger.

Victims of Chilas accident laid to rest in Takht Bhai

The funeral prayer of five people, who lost their lives in a traffic accident in Chilas on Thursday, was offered at their ancestral village in Pir Sadi in Takht Bhai tehsil of Mardan.

The victims were laid to rest after the funeral. A large number of people attended the funeral.

Alamzeb and his neighbour Naseeb Shah, who were carpenters in Gilgit and were there along with their families, were coming to Takht Bhai in a Suzuki van when it met an accident in Chilas. The van skidded off the road due to snowfall and fell into Indus River in Goner, Chilas.

Three daughters of Alamzeb, including 25-year-old Sumera, 22-year-old Laila and 20-year-old Sana, and Naseeb Shah, his 38-year-old sister Memona and two-year-old niece Fajra lost their lives, while wives of Naseeb Shah and Alamzeb were critically injured. The injured persons are under treatment at a hospital in Abbottabad.

Average 15 people die every day in accidents in Pakistan

According to Pakistan Bureau of Statistics (PBS) data on traffic accidents in Pakistan, average 15 people die every day in traffic accidents across the country. The data from 2004 to 2013 shows that Sindh was deadliest in terms of average people killed in accidents, followed by Punjab, Balochistan and Khyber Pakhtunkhwa.