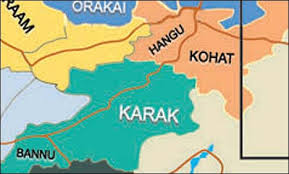 KARAK, 24 May: At least five persons died, including a woman, in a road accident in Naripos mountainous area today. Sixteen others suffered injuries.

The district police said that the Banda Daud Shah-bound van plunged into a ravine after the drive lost control over the vehicle due to over-speeding.

Meanwhile, three women died in Kohat as the roof of a house collapsed in Garhi Bahram Khan.