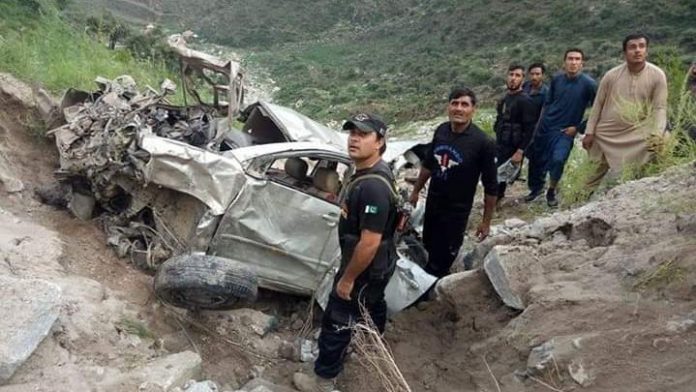 BUNER: Five people, including three women and a child, lost their lives and two others sustained injuries when a car plunged into a deep ravine at Karakar mountain in Buner Wednesday.

A family was travelling to Tangora area of Buner from Mingora, Swat, when the break of the car malfunctioned at Karakar mountain and it fell into a deep ravine. Four women and a child died on the spot, while driver and a child sustained injuries. Three other children remained safe in the accident miraculously.

The Jamaat-e-Islami (JI) district councillor Gul Muhammad Khan immediately reached the spot of the accident along with an ambulance of Al-Khidmat Foundation and retrieved the bodies and the injured.

The deceased included a second year student Mudasir, while the identity of the second deceased person could not be ascertained.

Meanwhile, two brothers died while another person was wounded when a vehicle hit a motorbike in Peshawar on Tuesday.

Meanwhile, three young boys lost their lives when their motorbikes collided near Kanpur in Haripur.

Police said that the motorcycle of Faisal Mehmood Abbasi and Amir Hamza, residents of Pind Gakhra village, coming from one direction collided with another motorbike driven by Yasir Beg near Khanpur on Tuesday.

All the three young men were critically injured in the accident. They were taken to tehsil headquarters hospital in Khanpur from where they were referred to Trauma Centre where Faisal Abbasi and Yasir Beg were pronounced dead while Amir Hamza succumbed to his injuries in Ayub Medical Complex Abbottabad.

Most of road accidents happen in Khyber Pakhtunkhwa due to poor condition of roads and untrained drivers.