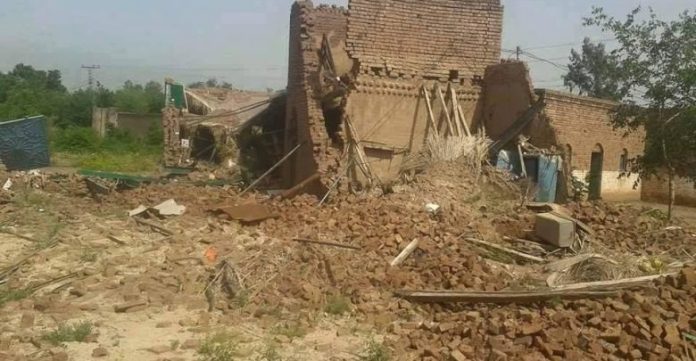 LANDI KOTAL: Five members of a family including, three women, lost their lives the roof of the house caved in Shaikh Mali Khel locality of tehsil Landi Kotal on Tuesday after heavy rain lashed the tribal district for the whole night.

According to district administration, the inmates were asleep when the house of Shakirullah collapsed killing three women identified as Khkula, wife of Awais, Wife of Abid Ullah along with their Daughter and a male member of the family Rashid, died on the spot.

After the tragedy, the local people rushed to the spot for the rescue of the family, however, they failed to retrieve them from under the debris alive. The dead bodies were shifted to the hospital from where after necessary legal procedures, it was handed over to the heirs.  Those who injured in the tragedy were admitted to the hospital, where their condition is stated to be out of danger.

Line Officer Swalzar Khan Afridi, arrived at the spot along with Khasadar and levies personnel and directed the hospital administration to provide good medication for all those injured in the tragedy.

MARDAN: A roof collapse incident was also reported from district Mardan where the roof of a general store caved in due to rain killed the store owner on Tuesday. One person was also injured in the incident and was shifted to the Mardan medical complex where his condition is stated to be out of danger.

Bilal Ahmad Faizi, spokesperson for Rescue 1122 emergency services of Khyber Pakhtunkhwa said to media persons that after the tragedy was reported, a team of the rescuers rushed to the spot and retrieved, a man identified as Khan Muhammad, and was shifted to hospital where he was pronounced dead. He further added that another man, identified as Awal Deen was rescued alive from under the debris and shifted to the hospital.