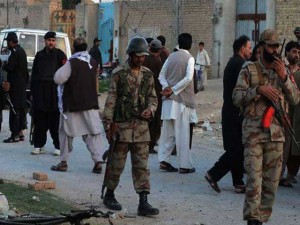 QUETTA: Five security personnel were martyred and six others sustained injuries in firing by unknown militants on their vehicle in Turbat district of Balochistan on Monday.

Levies sources said a vehicle of the security forces was traveling from Turbat to Shapok when it came under attack from the militants. The injured security personnel were taken to hospital. The vehicle was also completely damaged in the attack.

The security forces cordoned off the entire area after the incident and launched search operation.

Balochistan Chief Minister Abdul Qudoos Bizinjo condemned the attack on security forces and said the soldiers are our heroes.