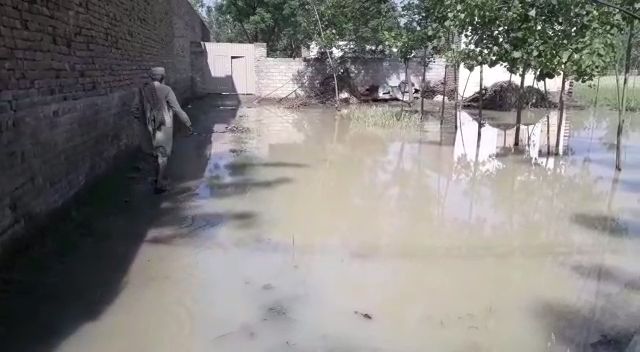 CHARSADDA: The water level in Swat River in Charsadda has increased after the recent rains and floodwater is flowing in fields and fruit orchards.

Sholgara and Khat Koroona areas of Charsadda have been submerged and standing crops of farmers have been destroyed. A farmer, Irshad, said while talking to TNN that his wheat, sugarcane and strawberry crops have been affected badly. He said one nullah has been flooded due to heavy rains after which the overflowing water entered fields and played havoc with crops.

Irshad said his crop standing on about 30 hectors have been damaged. He said the floodwater may also enter the residential area and damage their houses. He appealed to the government to take notice of the situation and save the people from flood.

Another farmer, Aslam, told TNN that the government is well aware that the area has been hit by low-level flood but no step has been taken to protect the area people or their crops. He said no one has come to enquire about the situation. He said the local people are poor and they have suffered losses in the flood.

Aslam said although the crops have been destroyed, but now there is danger that the floodwater will enter their houses.

The local people said flash flood has caused damages to crops and more damages are feared. They said some residential areas have also been affected. They demanded the relevant authorities to help the flood affected people.

One killed in Nowshera firing

One proclaimed offender was killed in exchange of fire with police in Doran area of Nowshera on Saturday night.

Police said a raid was conducted in Doran area on a tip off that criminals were present in the area. When the police party reached there, the criminals hiding in their hideout opened fire after which the police retaliated. One criminal, identified as Jan Said, was killed in the firing, while others escaped. The body of the slain criminal was taken to District Headquarters Hospital for post mortem.