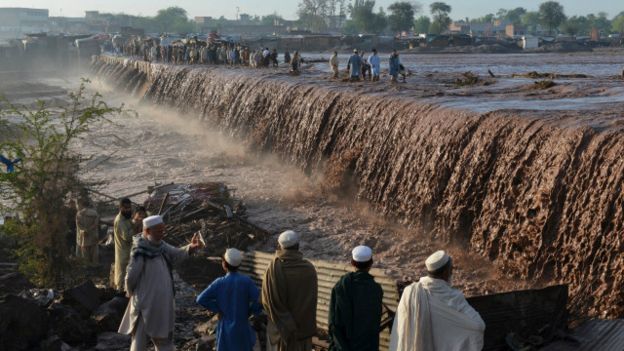 WANA: Eight wedding guests, including six women and two children, lost their lives and eight others went missing after their vehicle was swept away by flash flood after heavy rain in South Waziristan tribal district on Friday.

Deputy Commissioner Nauman Afzal Afridi said a van carrying wedding guests was travelling from Umar Khan Killi to Wana when it was swept away by flash flood in Toe Khula area. Six women and two children died in the tragic incident, while eight women and children are still missing.

The rescue teams and Frontier Corps personnel with the help of local people are making hectic efforts to recover the missing people. Sources said the number of casualties may increase as missing women and children have not been recovered so far.

Official sources said the security personnel were on routine patrol in Speen Wam area of Mir Ali tehsil when a landmine exploded on them near Noorkhel check post. The injured soldiers were identified as Farhan and Ikram. They were shifted to a nearby hospital where their condition was stated to be out of danger.

After the return of the temporarily displaced persons (TDP), several incidents of landmine explosions occurred in the tribal districts, particularly in North Waziristan, which caused many casualties. The militants while leaving the region after the military operation planted several landmines which have trapped several people, including security personnel, so far. This led of an uneasy situation in the region and people demanded clearing of these landmines. Hundreds of landmines have been removed from the area for.

Meanwhile, Hangu police in a successful raid arrested a man who allegedly shot dead his step-mother a day earlier.

The accused, Noor Muhammad was not happy with second marriage of his father and shot dead his step-mother.