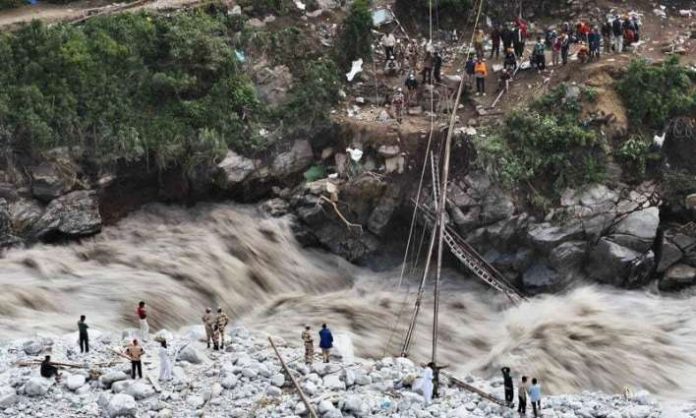 CHITRAL: At least 10 houses have been washed away in flood in the remote Yarkhoon Lasht village of Upper Chitral, a dozen houses are partially damaged, while a girl also drowned.

Local sources said the deceased girl was a student of ninth grade. The body of the girl has been retrieved, while the rest of people of the area have shifted to safer places.

According to information received from Yarkhoon Lasht, the melting of snow from glaciers has increased with increase in temperature and volume of water flow in streams kept on increasing and finally moved towards the populated area in the village in shape of a flood on Friday. There were reports that dozens of cattle were also washed away in the flood. The standing crops in the area also suffered damage.

The deputy commissioner confirmed that some houses have been damaged completely, while some are damaged partially in Yarkhoon Lasht. He said the buildings of the local police station and Chitral Scouts post have also been vacated after floodwater entered there.

Shah Saud said the flood impact can reduce if improvement was witnessed in weather. However, increase in temperature will further increase the threat of flood owing to fast melting of glaciers. However, relief activities did not start on the site till filing of this report.

Social circles of the area have demanded the government to immediately help the people affected by the flood.

Local social activist Qari Faizullah reached the village along with a team of volunteers and helped the people to shift to a safer place from the affected village. He also announced provision of ration package for the affected families.