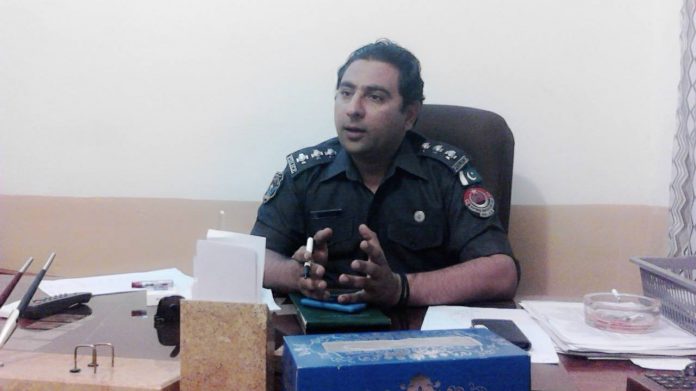 Pir Johar Ali Shah says we have only one ancient road in Peshawar, which is called Grand Trunk (GT) road. We have no alternative route other than this road. An increase of 226 percent has been witnessed in the traffic volume in Peshawar between the years 1998 and 2009. On the other hand, less than one percent roads had been constructed during this period of over 10 years. To put it simply, it means that the traffic volume has increased 226 times in the previous 10 years. He questioned how these roads can be cleared in such a situation.

TNN: What is your strategy to resolve this problem?

Pir Johar Ali Shah: Traffic Police is only a law enforcement institution. It is not the job of Traffic Police to construct roads in Peshawar or any other part of the country. It is the government’s job. Peshawar’s internal traffic problems can be resolved with the construction of flyovers and underpasses.

TNN: You have mentioned the government and PDA’s role. What can Traffic Police do in this regard?

Pir Johar Ali Shah: Traffic Police impose fines on those who violate traffic rules and also educate the people about the traffic laws. In case of any emergency situations, the Traffic Police play the role of opening the road.

TNN: The FC had blocked the FC Road yesterday for recruitment purpose. Did you take any stand on it?

Pir Johar Ali Shah: The government should provide alternate places to them for recruitment purposes. If it is not possible then a flyover and underpass should be constructed at the site to ensure smooth traffic flow.

TNN: Sometimes roads are blocked in protest demonstrations. Do you make announcements to people to use alternate roads, like Charsadda Road or Ring Road etc?

Pir Johar Ali Shah: We inform our friends in the media to inform the masses through their channels about closure of roads so that they could adopt alternate routes. Besides this, we have set up a helpline 1915 at the Traffic Police Department which could be dialled free of cost. People can ascertain the reason behind the road closure on this helpline.

TNN: Everybody doesn’t have access to the TV or radio all the times. Do you make any such announcement on loud speakers?

Pir Johar Ali Shah: Loud speakers and routers are installed in all our vehicles which make such announcements, but it has its own limitations. We will also consider your suggestions in this regard.

TNN: It is the government and PDA’s job to construct flyovers. It seems the Traffic Police don’t have any plan of its own?

Pir Johar Ali Shah: It is not true that we don’t have any plan. We have asked the Director of the PDA and Khyber Pakhtunkhwa government to construct five underpasses from Rehman Baba Chowk to Phase-III Chowk. This can resolve the traffic problem to a great extent.

TNN: About 35-40 permits have been issued to the Hiace vehicles and about 70-80 more applications are pending in this regard which will be accepted. Will this not add to the traffic mess?

Pir Johar Ali Shah: RTA should be asked what it is doing about the old vehicles plying the Peshawar roads. It is the responsibility of RTA to issue permits to old vehicles and fix fares.

TNN: What is your opinion about traffic signals in Peshawar?