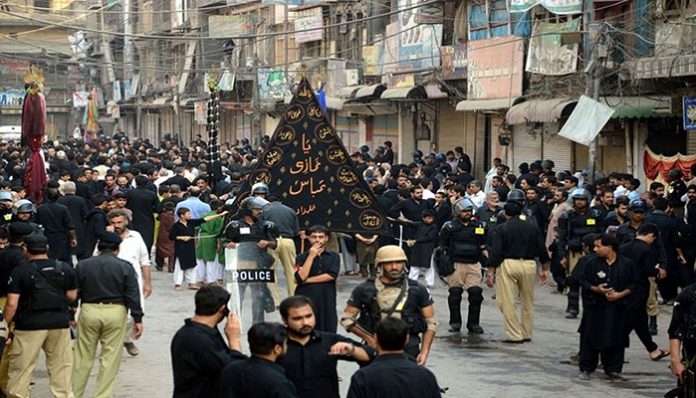 PESHAWAR: The Capital City Police Peshawar has formed a comprehensive security plan for Muharramul Haram under which about 10,000 police personnel and officers will perform security duties inside and outside Imambargahs in the city.

According to a notification issued from the office of Chief Capital Police Peshawar Muhammad Karim Khan, 10,000 police personnel will be deployed for security, all the Muharram procession routes will be checked four times through bomb disposal unit (BDU) and sniffer dogs and security will be checked through CCTV cameras to keep an eye on suspicious persons. The notification said three-liar security will be provided to the participants of Muharram processions. Specialist snipers will be deployed at high-rise buildings situated at Muharram procession routes and security men will also remain present at picking points.

Checking at entry and exit routs of the city has been increased further. To further improve security, entry of all vehicles inside the city will be banned during Ashura days. The process of checking data of guests at all the hotels and guest houses in the city is also underway.

A supreme command post has also been established in Peshawar which is equipped with modern facilities to ensure proper monitoring of Imambargahs, Muharram processions and sensitive places in the city. The BDU, Ladies Police, DSB, ambulances, Rescue 1122 and district administration officials will remain present in the post round the clock during Muharram.

Officials said a proposal has been made to keep the mobile phone service suspended during 9th and 10th Muharram to ensure fool-proof security. A communiqué has been sent to relevant officials in this regard.

Meanwhile, the district administration of Peshawar has imposed Section 144 till 13th of Muharram under which wall-chalking, pillion-riding, distribution of posters, display of arms, use of tinted glasses in vehicles and provocative speeches have been banned in the city.