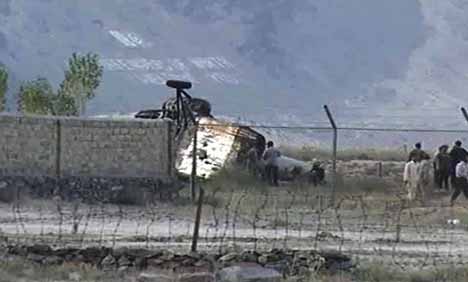 PESHAWAR May 08: As many as seven people including ambassadors and military men died in a helicopter crash in Naltar area of Gilgit district today..

According to Inter-Services Public Relations (ISPR), the ambassadors of Philippine and Norway, wives of ambassadors of Malaysia and Indonesia and two majors of Pakistan Army were killed in a tragic incident.

The foreign office said that more than 23 foreign diplomats and some officials left for a three-day trip to Gilgit. One of the helicopters crashed during emergency landing in Naltar area which also damaged a school.

The ISPR said 11 foreigners and six Pakistani were on board in the crashed helicopter and seven of them were killed and others sustained injuries. The injured were shifted to Gilgit military hospital.

Prime Minister Nawaz Sharif was also planned to visit the area for inauguration of a development project in Gilgit. However, due to the incident he postponed his visit. The prime minister announced one-day national mourning.