The Forest Department lodged a First Information Report (FIR) against the Indian pilots for destroying 19 trees in Jaba village, Balakot on Friday. Officials of the Forest Department in Balakot have registered the case in local police station against unidentified pilots of Indian Air Force for dropping their payload at forests in Balkot and destroying 19 valuable trees.

The officials said that the total worth of19 pine trees is Rs190 million. The federal government was also mulling to register a complaint against India of ‘Eco-terrorism’ at the United Nations.

Earlier, Climate Change Minister Malik Amin Aslam had said that Indian pilots had targeted a ‘forest reserve’ and the government was undertaking an environmental impact assessment and would lodge a complaint against India at the UN and other international forums. 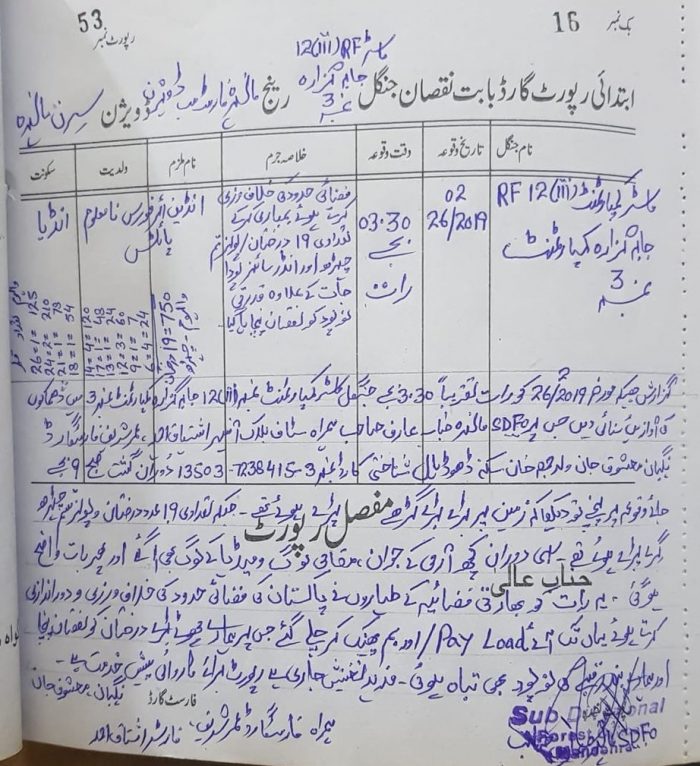 It is pertinent to mention here that as per a US General Assembly resolution, “Destruction of the environment not justified by military necessity and carried out wantonly, is clearly contrary to existing international law.”

Two Reuters reporters who visited the site of the bombings, where four large craters could be seen, said up to 15 pine trees had been brought down by the blasts. Jaba Villagers also dismissed Indian claims that hundreds of militants were killed in the strike and revealed that one villagers have sustained injuries.

The sources had said that the Forest Department had sent a final report in this regard to the federal government for further action into the case.

Observers of the United Nations, World Wide Fund (WWF) for Nature and other international environmental bodies will also visit Jaba village, the area of Balakot on next Thursday. The international observers will prepare a comprehensive report on damage to the environment due to the payload dropped by Indian fighter jets in haste, who had violated the Line of Control (LoC) on February 26.