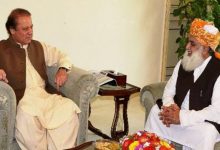 Media reports said that Maulana Fazl met PMLN quaid at his Jati Umra residence to convince him to attend the APC scheduled for October 31.

Maulana Fazl failed in convincing him as the Nawaz Sharif decided against attending the conference himself despite the JUI-F’s chiefs repeated requests.

A high-level delegation of the PML-N will attend the conference instead, the reports said.