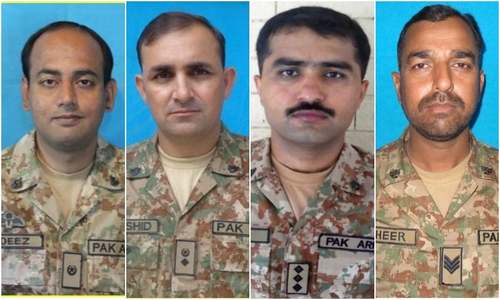 MIRANSHAH: Four officials of Pakistan Army were martyred in a blast in Khar Kamar area of North Waziristan Tribal district on Friday. The martyred security men include three officers and a soldier.

Just a day before this attack, two Frontier Corps soldiers were martyred in Balochistan’s Harnai district. They were also targeted through an Improvised Explosive Device. A few days back, an Army soldier was martyred in a gun-and-bomb attack on a security vehicle also Khar Kamar area of North Waziristan. The ISPR had linked the attack with the May 26 incident in Boya clash, when 13 people lost their lives in a clash with security men on a check post.

The situation in North Waziristan’s Boya area is already tense after the May 26 clash of security forces with protesters. Mohsin Dawar has already handed over himself to the security forces to avoid any further bloodshed in the area. The Chief Minister Mehmood Khan has also announced a compensation package for the victims of May 26 incident and made it clear the government will never allow the use the Pakhtun for their political motives. The tribal elders have also pledged to play their role for peace in the tribal district.