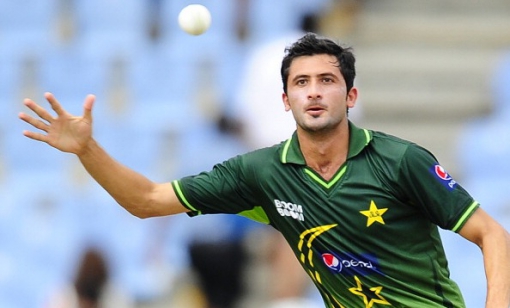 TNN interviewed Mr Junaid Khan to get an insight of his routine life. Junaid Khan, who bowls left arm fast, says that his selection in the world cup 2011 was the happiest moment of his life. His liking for cricket developed when he used to see his relatives play cricket at club level.

TNN: Which area of Khyber Pakhtunkhwa do you belong to?

Junaid Khan: I am from Mathra Daagai area of Swabi district. I have studied up to eighth grade and then I was selected for the under-19 cricket team. Later, I could not pursue my studies after I got selected for the national team.

TNN: How did you feel when you saw your name on television and in the newspapers as a national team player?

Junaid Khan: I was fortunate enough as I had been nominated a few days ahead of the world cup. However, luck didn’t favour my cousin Mr Saeed Tanveer because he got unfit and as a result the International Cricket Council (ICC) ruled him out of the world cup 2012 and inducted me in the team instead.

I used to play in the Gohati Cricket Stadium those days. My relatives and friends had called me but due to busy schedule I left my phone unattended and had kept it in the locker. Eventually when the press approached me in the Swabi sports ground and told me about my selection, it was like a dream come true for me.

In an interview with a local Urdu newspaper, I claimed that I shall be a part of Pakistani cricket team in the coming three years, God willing! And to my good luck, my longing was fulfilled in a period of three years and four days.

TNN: You have played in various categories of cricket matches, such as T-20, test match series and one-day matches; which one do you like the most?

Junaid Khan: In the field of cricket, one prefers to be called a player of test match. It’s because if a player takes part in one of the test series and hundreds of one-day matches, he would always be recognised as a test player. Secondly, I like test matches because I enjoy playing them; both a bowler and a batsman get full chance to play in the test matches.

TNN: What clicked your mind when you were bowling for the first time?

Junaid Khan: My debut test match was against Zimbabwe where I had to play on a dead wicket. After that I decided to give my best, though I couldn’t hit many wickets, my economy rate had reached up to 1.8.

TNN: So far, which of the matches have you enjoyed the most?

Junaid Khan: I had hit five wickets in the first innings of my second test that was against Sri Lanka in Abu Dhabi. But unluckily I dropped four or five catches in the second innings. That was one of the most memorable matches and I enjoyed it a lot.

TNN: Which of the one-day matches have you relished?

Junaid Khan: In four or five overs, I had hit four wickets on four runs in a match with Ireland. I was jinxed as I lost my grip due to rain amid the match but at the same time that was really unforgettable.

TNN: Apart from playing for Pakistan, do you play cricket either from a county or club?

Junaid Khan: I play club cricket from the platform of Pakhtunkhwa Cricket Club, Swabi. And this is the second season that I have signed contract with Lanka Sher.

TNN: What should the new players do to make it to the national cricket team?

Junaid Khan: If a player does practice for an hour or two daily, his struggle won’t ever go to waste, provided he works hard.

TNN: How do you assess the FATA cricket?

Junaid Khan: If we take a look of FATA cricket, the players like Mr Riaz Kaa’il, Mr Asif Afridi, Mr Rehan Afridi and others have served in the first-class and A category matches. What I feel is that the FATA cricket is going well and it is likely to improve further in the days to come.

TNN: What is in your bowling action that troubles a batsman during a match?

Junaid Khan: I think it is out-swinging, by which I have bowled out several good batsmen.

TNN: We usually watch you on television in different commercial ads; would you prefer acting in the movies if ever offered with a chance?

Junaid Khan: I have no such intentions of acting in movies as yet. However, if I am asked to work in commercials, I would readily accept the offer.

TNN: Are you married?

Junaid Khan: Not yet. And I have decided not to get betrothed or married for next five years.

TNN: Would you go for love marriage or prefer purely an arranged marriage?

Junaid Khan: Well, I want to marry of my own accord but I would also like to respect the will of my parents.