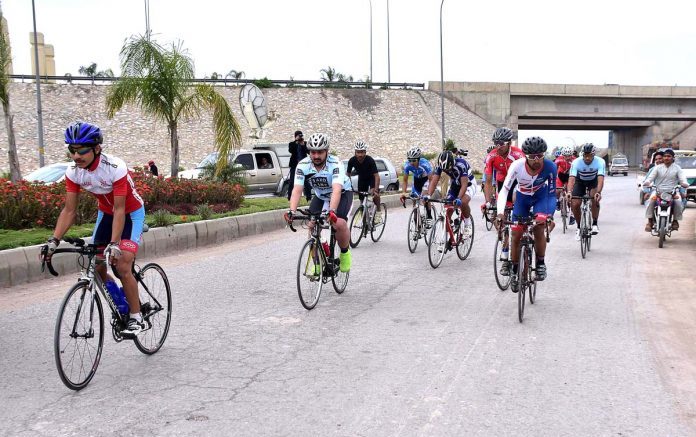 PESHAWAR: It was Friday evening, a bunch of cycles were overtaking each other. Green, red, orange, blue cycles were on the wide road. The enthusiastic fast rounding feet of the cyclists indicates their devotion to the race and to be the topper of day.

It was not any international or even national event of cycle racing; it was a local race organised by the local people living in Peshawar and adjacent areas around. Every Friday the local boys belong to Shagayi, Charsadda, Nowshera, Nahaqi and some other villages and areas near Peshawar organise the cycle race on the Northern Bypass or Ring Road Peshawar. All the arrangements of kits, shoes, cycles and other stuff are made by cyclists on their own, Said Sheraz Khan, a local cyclist.

He said that as they have limited resources and income for buying a new sports cycle, they used to buy China or Sohrab local cycle with price ranging from Rs3,000 to Rs4,000 and modify it by installing plates, rims and other stuff.

A cycle dealer at Karkhano Market in Peshawar said the prices of local cycles have increased as these cycles are modified by the young boys and used for racing mostly.

Sheraz Khan said that recently a cycle race was organised by the KP government in which he took top position and was awarded cash prize. He hoped that by this step the local cyclists will get recognition and they will get chance to participate in trials for selection in national games.

Haleema Ghayoor, a cyclist from KP who won six gold, eight silver and seven bronze medals, said about the local cyclists that it shows the future of cycling in Pakistan is bright. She said the locals had made their own identity in the cycling who we can usually see on Friday evenings on the Ring Road and Northern Bypass. The cyclists have coloured their cycles to indicate that they are part of a particular team.

Cyclists are also seen practicing on Ring Road and Northern Bypass. Haleema said the cycling associations organise trials for selection of cyclists to give them opportunity to prove their talent. She said the cyclists after selection get jobs in different departments like Wapda and Army.

She said all the participants who are now the national-level cyclists are here through the China and Sohrab cycles and they also did practice on the same roads where locals are practicing and racing.

Haleema said that seeing the enthusiastic approach of locals to the cycling it can be safely concluded that the future of cycling is very bright in Pakistan.

“We encourage the females to join cycling as I am one of them and I have gained recognition,” she said.