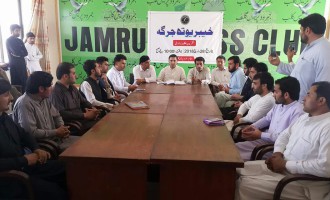 JAMRUD: Tribal youth have intensified their efforts to force the government expedite implementation process of Fata Reforms and threaten a sit-in in federal capital Islamabad if the reforms were postponed further.

Giving a deadline of April 15 for implementation of the reforms, they said if their demand was not fulfilled they would stage a sit-in till the reforms implemented in its letter and spirit.

“Frontier Crimes Regulation is nothing but a yoke of slavery in our necks and we want to rid of this symbol of British-era draconian law as well as immediate merger with Khyber Pakthunkhwa,” said Adnan. If we are really citizens of this country then we demand equal rights given to people of settled districts guaranteed under Constitution of Pakistan, he added.

The FYJ office-bearers demanded three percent share in National Finance Commission and allocation of a special package worth Rs500 billion for development of Fata.  The warned the government for turning a blind eye towards their plights and vowed to stage a sit-in till their demands were met.