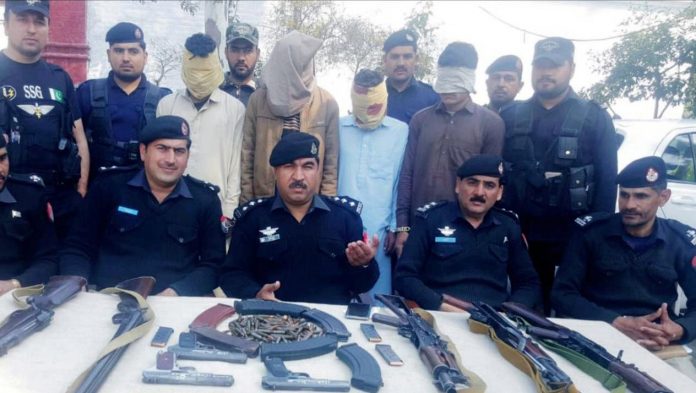 MARDAN: Mardan Police has nabbed a four-member gang involved in sexual harassment of a girl and also recovered arms from their possession.

A police spokesman said a girl, Iqra had filed a report with Rustam Police Station on March 8 that four accused including Mehran, Hayat, Akif and Hayat took her forcibly to a garden in Garakol Bai Khan area and subjected her to sexual abuse. She alleged that the accused also made her video and kept harassing her with that video.

District Police Officer (DPO) Sajjad Khan took notice of the incident and asked police to ensure immediate arrest of the culprits. Police have arrested the four accused and recovered arms from their possession.

The police spokesman said the accused during initial interrogation confessed to their crime. Further investigation into the case is underway.

In a separate raid, five suspected criminals were arrested and arms were recovered from their possession.

A man and his son lost their lives when roof of their house collapsed in Kakakhel area of Rajar in Charsadda on Friday.

The deceased were identified as 32-year-old Arshid and his three-year-old son Daniyal. Local sources said the house was in a dilapidated condition and its condition further weakened during recent rains.

Meanwhile, one person was killed in a firing incident in Hisara area of Charsadda.

The deceased was identified as Jan Ali Khan. The reason behind the murder could not be ascertained. A case of the incident has been lodged against unknown culprits.

Meanwhile, a man committed suicide after killing his wife and three children over a domestic dispute in Chiniot district of Punjab.

Police said one, Ejaz killed his wife and three children and later committed suicide by shooting himself over a domestic dispute. A police team reached the site and initiated investigation.