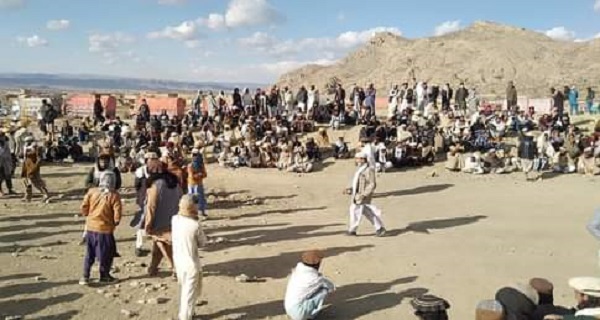 WANA: The Gangikhel tribesmen on Saturday staged a protest demonstration outside the Customs office at the Pak-Afghan border in Angoor Adda, South Waziristan tribal district, over parking tax.

A large number of trucks carrying goods are stranded on both sides of the border for the last few days. A large number of people, including elders of Gangikhel tribe, participated in the protest.

While addressing the protesters, tribal elders Malik Said Anwar, Shahzad Khan, Arsal Khan and others said different institutions receive parking tax from vehicles on the land owned by Gangikhel tribe. They said the officials have also forbidden the Gangikhel tribesmen from receiving the tax. They said they will only withdraw from their right to receive the tax after the government gives back the land to Gangikhel tribe.

A Customs agent told TNN on condition of anonymity that Scouts Force, district administration and police are in differences with each other to pursue their own interests. He said Ahmedzai Wazir tribe is suffering losses of millions of rupees due to this confusion. He said the chief minister, corps commander Peshawar and Inspector General Frontier Corps South must take notice of the issue.

The Customs agent told that Scouts Force receives 30 percent tax per truck from the area. Gangikhel tribesmen have called upon the government to find a solution to the problem without further delay.

Recently, the district administration and police came face to face over running the affairs of Angoor Adda check post.

The deputy commissioner’s office said two officials were sent to look after the administrative affairs to Angoor Adda check post after opening of the border gate with Afghanistan. However, police arrested both the district administration officials as soon as they arrived at the check post.

District Police Officer (DPO) Shaukat Khan had said the deployment of political moharrars on the check posts after merger of erstwhile Fata with KP is illegal.

However, sources said, all the issue is about money as Angoor Adda check post is considered a very ‘profitable place’.