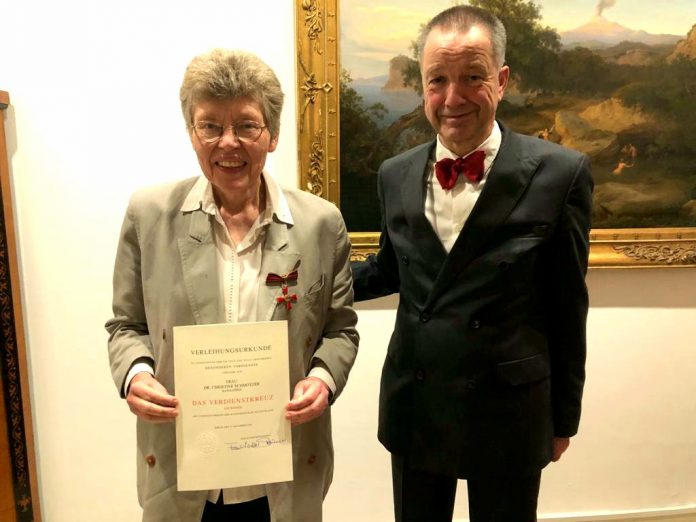 PESHAWAR: On behalf of the German Federal President, German Ambassador to Pakistan Bernhard Schlagheck awarded Dr. Chris Schmotzer, medical doctor and director of the Leprosy Hospital in Rawalpindi, with the Order of Merit on Thursday in a ceremony held at the German Embassy Islamabad.

The honour is the highest tribute the Federal Republic of Germany can pay to individuals for outstanding services. From the Pakistani government, Minister of Health, Dr. Faisal Sultan, attended the ceremony and commended the work of Dr. Schmotzer and her team, says a press release.

Dr. Chris Schmotzer was bestowed the Cross of Merit for her tireless service to humanity. As director of the Rawalpindi Leprosy Hospital, she has been serving the Pakistani people for 33 years now, offering treatment to patients with leprosy, tuberculosis, eye and skin diseases as well as rehabilitation measures. Being member of the German Protestant Sisterhood of ChristBearers, the “German sister” – as she is called by her Pakistani patients – decided to come to Pakistan shortly after finishing her medicine studies in 1988. Since then, she has contributed
to fight leprosy and tuberculosis in Pakistan. She also closely collaborated with Dr. Ruth Pfau and the Marie Adelaide Leprosy Centre in Karachi.

During the awarding ceremony, German Ambassador Bernhard Schlagheck underlined: “Dr. Chris Schmotzer is a role model of true philanthropy! Thirty-three years ago, as a young woman, she decided to devote her life to the service of humanity. In Rawalpindi and beyond, she is widely known and respected as a compassionate and devoted medical doctor who always gives priority to the treatment of sick and needy people. As a token of appreciation of the German Federal President for her tireless work, I gladly hand over the Cross of Merit to Dr. Chris Schmotzer.”

The Order of Merit, instituted in 1951, is awarded to German and foreign citizens for achievements in the political, economic, social or intellectual realm and for all kinds of outstanding services to the nation in the field of social, charitable or philanthropic work. The award is not associated with any financial allowance.