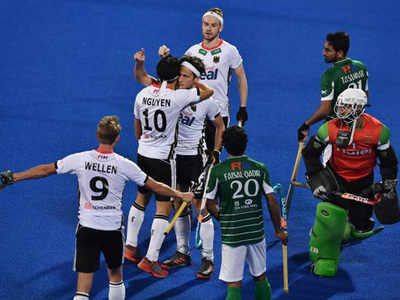 PESHAWAR: Pakistan showed good fighting spirit in their opening encounter in the Hockey World Cup 2018 in Bhubaneswar, India, on Saturday evening, but lost the match 1-0.

Pakistan, the four-time world champions, despite a poor build-up to the mega event due to a plethora of problems, gave a tough time to Olympics bronze medallists Germany and held them until 36th minute when Germany’s Marco Miltkau scored the only goal of the game.

Pakistan’s goalkeeper Imran Butt was very efficient and saved two goals. Pakistan were mostly defensive during the game. Only one penalty corner was secured by Germany during the game which was blocked by Pakistan.

In another match of the day, Netherlands trounced Malaysia 7-0.

Pakistan will play their next match against Malaysia on 5 December.