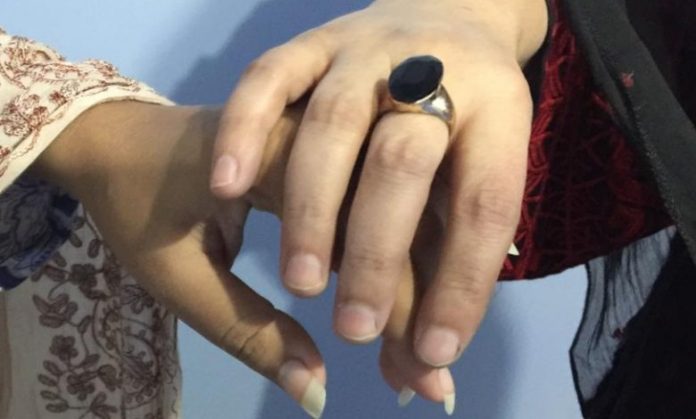 PESHAWAR: A girl in Peshawar has alleged that she is facing sexual harassment from a homosexual woman for the last few months.

The 32-year-old girl, Noreena (supposed name) said she received a friend request from the woman on Facebook one year ago. She said when she checked the profile, the woman was headmistress of a government school. She said the woman was added with some well-known personalities on social media, so after careful scrutiny she accepted her friend request.

Noreena said the woman used to send message of ‘Salam’ and enquired her well-being after interval of two or three days and she used to send reply. She said the woman told her that her husband has passed away and children are married off and whenever she feels lonely she sends messages to friends. Noreena said she told the woman that she could call her as she considered her like her aunt.

Noreena said the woman sought her phone number after two months and said she is like her daughter and she will contact her whenever she felt boredom.

“One day, she out of nowhere offered me ‘friendship’ which surprised me as I did not understand it as we were already friends on Facebook and we were talking like friends on phone,” she told TNN.

Noreena said the woman told her that she wants a special kind of ‘friendship’. “I had heard about homosexuals, but practically it was first time I was talking to such woman. It was a terrible moment,” she recalled.

Noreena said she immediately blocked the woman on Facebook and also blocked her phone number, but she continuously tried to contact her from other numbers.

“And then the horror peaked when she sent me her indecent photos and videos on WhatsApp,” she alleged.

Noreena, who is working in private sector for the last few years, says she doesn’t know how to submit application in institutions working against sexual harassment.

According to Sexual Harassment Act of 2010, a person can be sacked from job if found involved in sexual harassment. KP Ombudsperson Rakhshanda Naz says the law provides similar punishments for men and women accused of sexual harassment.

However, Noreena is not willing to approach the Ombudsperson as she wants to stay away from legal issues. She said the harasser women offered to bear all her monthly expenses in case she accepts her friendship and warned that she will give her contact number to rogue guys who will make her life miserable if she snubbed her offer.

Noreena said she has so far blocked about 20 different numbers from which the woman harassed her. She said she hasn’t changed her own number because she has applied for different jobs with this number.

Khursheed Bano, administrative officer of Da Hawa Lur, an NGO working for rights of women, said there is no registered case in KP about harassment from a person of same gender.

“It doesn’t mean that no such harassment is happening in our society. The problem lies in lack of awareness. In our society, the parents or children cannot talk openly on such issues,” she said.

Khursheed Bano said it is unfortunate that some women are also involved in homosexual harassment, but the affected women don’t come forward due to fears of negative publicity and other cultural restrictions. She said a student in girls hostel in Peshawar University had earlier accused her roommate of sexual harassment, but she also had refused to adopt legal course.

Ms Bano said our schools don’t provide sex-based education and the result is that the children lack awareness and often find themselves in difficult situations. She said children don’t know how to react or tackle the threat when they confront difficult situation like sexual harassment. She said victim children often hide their ordeal from parents and continuously face harassment.

Noreena said cultural issues are also hindering him from properly filing a complaint with the Ombudsperson. She said in case she goes for legal course, she fears getting negative publicity and additional tension.

Rakhshanda Naz said the sexual harassment convict can face Rs500,000 fine and the similar amount may be added to the fine if the victim says in the application that harassment caused depression which needed medical treatment. This additional amount will be given to the harassment victim. In case of harassment on social media or phone, the case is referred to Cyber Crime Department.