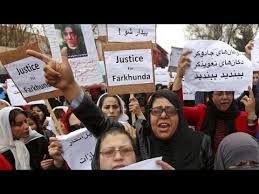 PESHAWAR, 2 July: A court in Afghanistan has overturned the death sentences of four accused in the murder case of a girl, Farkhanda.

The girl was stoned to death and her body was set on fire by an angry mob after a Mullah accused her of desecrating the Holy Quran.

The incident triggered protests by the women rights activists in Afghanistan and other parts of the country. An afghan court had awarded death sentences to four accused, including the Mullah, and 16 years imprisonment each to eight other accused.

Another court in Kabul has not overturned the death sentences of the accused. The case is still in the court.

On the other hand, the investigation officers of the case said the charges of burning a copy of the Holy Quran could not be proved against Farkhanda. They said the Mullah accused the girl to avenge her opposition to taveez-ganda.