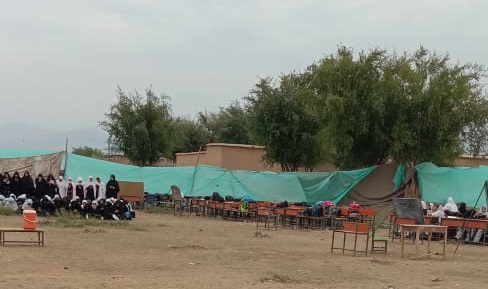 PESHAWAR: The Government Girls Higher Secondary School Samand Khan Killi in sub-division Hasankhel, Kandao Mashukhel, which was destroyed during militancy in 2012, will be reopened after seven years.

A teacher of the school told TNN following a video story made by TNN,  some officials of the Independent Monitoring Unit (IMU) came and sought data of the school, but they did not tell when they will shift them to the school building. She said security personnel also came two days ago and they said they are going to vacate the girls school building from armed forces within few days. At present, the girl students attend their classes under the open sky.

Local sources said it was initially a primary school which was built in 1984 after which it was upgraded to high level in 1990 and higher secondary level in 2005. During militancy, the militants destroyed many schools and the school in Hasankhel sub-division was also damaged in a blast. The school building was over taken by armed forces after it was damaged in the blas following which the girls students of the school were shifted to the boys middle school due to which they faced a lot of difficulties.

The boys students were also not comfortable with this situation and they started protests to vacate their school from girls students. The female students and teachers then decided to shift to an open ground outside the boys school and attended their classes there by installing a tent. That practice is still continuing and girls are getting education under open sky amid harsh weather conditions.

The female schoolteacher told TNN that the students will still attend classes under open sky even if they are shifted inside the school. She said there are no classrooms or other facilities in damaged girls school. She said the school building must be reconstructed to save the future of girls students.

A girl student said while talking to TNN that their parents want to educate them, but could not do so due to lack of facilities in schools of merged districts. She said people of merged districts are also equal citizens of Pakistan and they are also entitled to education and other facilities like other parts of the country. She said the girls are showing courage and passion by continuing their education under extremely difficult circumstances.

The school vice principal Shaheen Akhtar and other teachers said they are continuing academic activities despite extremely difficult circumstances and threats. They demanded the government to reconstruct the school building and provide all facilities. They said the district education officer has also been informed about the situation, but he is yet to take any action.

The sources said the school principal Yasrab Nayab is mother of former MNA Ayesha Gulalai and she is not paying much attention to the problems of the school.