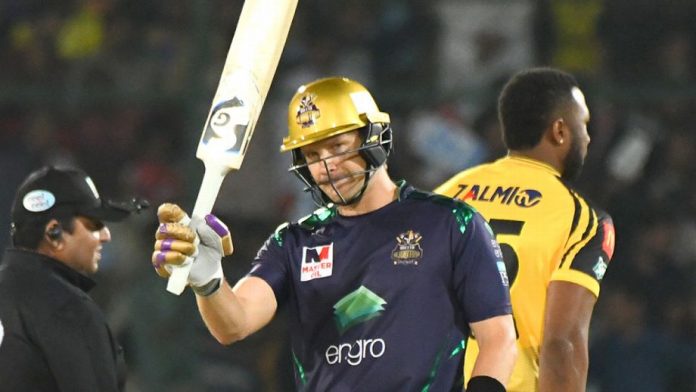 PESHAWAR: Quetta Gladiators defeated Peshawar Zalmi in the first qualifier of the Pakistan Super League (PSL) by 10 runs at the National Cricket Stadium in Karachi on Wednesday.

Peshawar Zalmi won the toss and invited Gladiators to bat first on a good-looking batting pitch. Gladiators captain Sarfraz said at the toss that they were looking to post 180, while Zalmi captain Darren Sammy said they were looking to restrict Gladiators to 170. Sarfraz got the desired total as Gladiators scored 186 for the loss of six wickets. Again Shane Watson was the pick of batsmen with 71 runs, while Ahsan Ali, who was included in place of Anwar Ali, scored 46.

For Zalmi, Wahab Riaz got two wickets, while Hasan Ali, Mills, Sameen Gul and Pollard took one wicket each.

Peshawar Zalmi kept everyone interested in the chase until the last over, but eventually fell short by 10 runs. Sammy (46) and Pollard (44) took the match close, but both fell in the last over and Zalmi ended up on 176/7. Quetta’s bowling combination was disturbed when Fawad Ahmed in his second over was hit in his face with the ball hit firmly by Imam-ul-Haq. He was severely injured and was taken to hospital. Later on it was stated that he is stable, but he lost at least one tooth from the hit. Rossouw completed the over of Fawad and was very effective as he got rid of Imam.

Zalmi needed 21 in the final over when Sarfraz decided to give the ball to Watson who hadn’t bowled since long. However, Watson vindicated Sarfraz and made sure Gladiators move to the final encounter.

Shane Watson was declared player of the match for his brilliant batting and controlled last over. It is third time that Gladiators have qualified for the PSL final in four seasons.

The next game will be eliminator in which Islamabad United will face Karachi Kings today (Thursday). The second eliminator will be played between the Peshawar Zalmi and winner of today’s eliminator tomorrow (Friday). The winner of the Friday’s match will face Gladiators in final on Sunday, March 17.