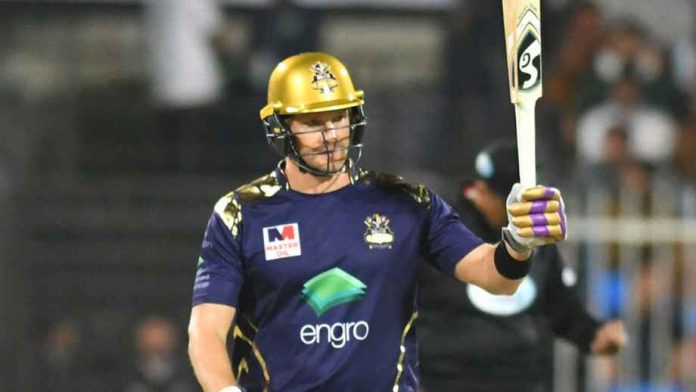 PESHAWAR: Gladiators continued their wonderful run in the Pakistan Super League and won their third consecutive match with ease in Sharjah on Wednesday night.

Gladiators captain Sarfraz Ahmed won the toss and invited Multan Sultans to bat first. Despite a good start, Multan Sultans could not accelerate in the end and managed to score 160 runs for the loss of nine wickets. Captain Shoaib Malik was to scorer with 53 runs, while James Vince scored 28. At one stage, Sultans were batting on 137 for the loss of three wickets, but as soon as Shoaib Malik lost his wicket, the scoring rate went down and they failed to put a massive total to challenge the Gladiators batsmen.

For Gladiators, Ghulam Musaddar and Mohammad Irfan took two wickets each, while Sohail Tanvir, Mohammad Nawaz and Fawad Ahmed got one wicket each.

As is the norm in the tournament so far, the chasing was a smooth sailing and Gladiators surpassed the target in the 19th over with the loss of just two wickets. Rossouw was top scorer with 61 runs, while Shane Watson scored 61.

Mohammad Irfan and Shahid Afridi took one wicket each for Sultans.  Shane Watson was declared player of the match.

It was third straight victory for Gladiators in the PSL-4. In the first match they defeated Peshawar Zalmi, while in the second encounter, they defeated defending champions Islamabad United. After getting an ideal start, they are looking well set to march into playoffs once again. After three victories in as many matches, Gladiators are on top of the points table, while the rest of teams have two points each with difference in run-rate. Lahore Qalandars, as usual, are languishing at the bottom.

For Sultans, their batting as emerged as a real concern. Even the star all-rounder Andre Russell is looking off colour and he could not live up to his reputation of power hitting so far. Sultans may face more trouble if the West Indies decide to call up Russell for the T20 series against England.

The next match of the event will be played today (Thursday) between Peshawar Zalmi and Karachi Kings. The match will begin at 9:00pm (PST).