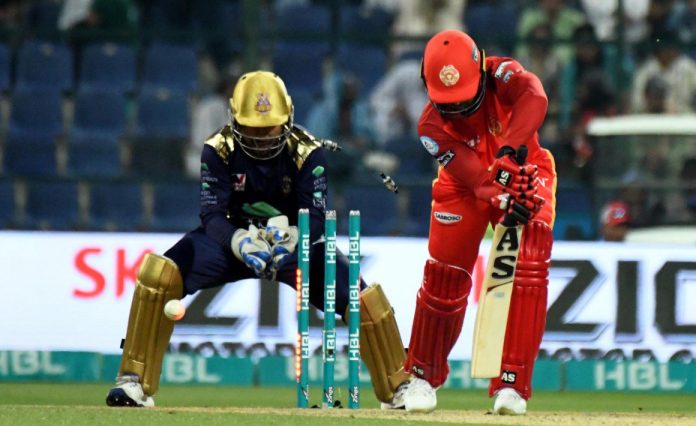 PESHAWAR: The UAE leg of the fourth edition of the Pakistan Super League (PSL) ended on Tuesday with Quetta Gladiators securing an easy 43-run victory against Islamabad United in Abu Dhabi and secured place in the too-two.

Gladiators after being invited to bat first scored 180 runs for the loss of nine wickets. Ahmed Shehzad was the pick of batsmen for Gladiators with 73 runs, while, Umar Akmal scored 27 and Rossouw scored 23.

The defending champions could score 137 runs for the loss of nine wickets and lost the match by 43 runs. Ronchi offered good resistance with his 64 and his opening partner Delport scored 25, but the rest of batsmen failed to impress.

In most of the recent matches, the teams batting second normally won, but Gladiators proved too good for United despite losing the toss.

Ahmed Shehzad was declared player of the match for his brilliant batting.

In an earlier match, Peshawar Zalmi defeated Lahore Qalandars by four wickets after a fascinating contest and secured place in the playoffs.

Qalandars were invited to bat first and they were restricted to 124 for the loss of seven wickets. Haris Sohail was top scorer with 43 runs, while Wiese scored 26.

Zalmi lost initial five wickets for just 20 and Qalandars were firmly in control after which Misbahul Haq and captain Darren Sammy joined hands for the biggest sixth wicket partnership of PSL. Misbah scored 59 in the process, while Sammy scored 46. Zalmi surpassed the target with just one ball to spare with the loss of six wickets.

Misbah, the oldest PSL batsman to score a fifty, was named player of the match.