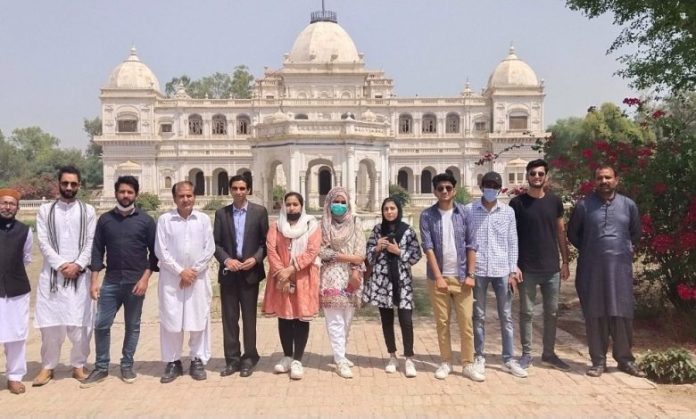 PESHAWAR: The ancient Sadiq Garh Palace was built in 1882 by Nawab Sadiq Muhammad Khan the 5th, the former ruler of Bahawalpur state. Its construction took 10 years and was carried out by 1,500 labourers, artisans, and others. The palace is located in Dera Nawab Sahib, near Ahmadpur East, and covers 126 acres area. The palace was built at a cost of Rs1,500,000 at that time by Italian professionals.

This historic white palace has maintained its charm and significance despite the passage of one and half centuries. This palace also held Nawab Sahib’s court, where he used to decide on various matters and disagreements between individuals and groups. He would enter another palace from a secret way, which was built under the throne, after making decisions and resolving the conflicts.

Lord Mountbatten, Viceroy of Pakistan and India, Quaid-e-Azam Muhammad Ali Jinnah, Emperor Muhammad Reza Pahlavi of Iran, and other international leaders have stayed as guests of Nawab Sahib in this historic mansion. This beautiful palace of Sadiq Garh includes four buildings on its ground, with 120 rooms above with attached bathrooms and kitchens and 50 rooms in the basement.

The palace has three storeys, and each storey was served by a conventional elevator imported from Germany. Each head of state has a regular room named after him in the palace, such as the Turkish Room, the British Room, the China Room, and so on. The leaders of 52 nations could stay in it at the same time. For that purpose, there were two rooms, a bathroom, and a kitchen.

The throne of Nawab Sahib was transported from Belgium, and a railway track was built to transport it to the palace from Karachi to Bahawalpur. The throne was covered in gold water and gold for three months in Karachi. The palace also features an underground bank, a cinema, a power plant, and a staff office, all of which were imported from England. There are wells, ponds, Baraadari, and a designated area for lions to be kept. The vehicle park for Nawab Sahib was situated in the structure next to the palace.

There is a stairway leading to the ground floor, and behind it are more palaces that served as Nawab Sahib’s family’s residence. The palace spokesman Saeed Kalachi keeps tourists and guests up to date on the latest developments.

A dollhouse was also built by Nawab Sahib for his lovely daughter. For her dolls, a miniature palace has been built, with everything made of small structures. Female slaves, labourers, maids, and other women lived at Rahat Mahal. There are women’s quarters, as well as a separate water storage area.

According to Saeed Kalachi, in 1903, when Nawab Sahib was enthroned at a very young age, his mother used to make decisions behind the curtains. Her young son Nawab used to sit on the other side of the curtain and listen to them. These decisions were made public and implemented later on, upon his instructions.

The palace’s exterior is built of white marble. Beautiful domes may also be seen on opposite corners of the palace, adding to its elegance. The palace’s arched entrances are still a tourist attraction. The state-run secretariat and a splendid mosque, both of which are masterpieces of Mughal architecture, are located adjacent to the palace.

Two palaces with residential houses, a cinema, and a gymnasium are also available. The palace also housed a weapons factory, a gold furnace, a water purification facility, a power plant, and a vehicle mechanic, according to some traditions. The palace is still considered a great work of art.

Bahawalpur is famous all over the world for its handicrafts, architecture, and calligraphy, etc. The golden roof of the palace, the tall pillars adorned with gold, the beautiful porch and the huge chandelier, which was sent by Queen Victoria of Britain as a gift to the Nawab, adds to the splendour of the palace. They were so beautiful that the palaces of the Ottoman era would also shy away from their beauty.

The special thing about this palace is that the shroud of the Kaaba was created there for one and a half centuries, and its old shroud was used in the palace as a blessing source. Nawab Sahib, according to Saeed Kalachi, did not turn his back when he came to see the shroud; and instead, he would walk backwards and go out. Today, the old palace is devoid of furniture, weaponry, artefacts, chandeliers, paintings, and other things, making it appear empty.

The palaces of Nawab Sahib were taken over by the Pakistani government after Bahawalpur was integrated into Pakistan. Its downfall began after Zulfiqar Ali Bhutto closed the palace. Tourists from all over the country, as well as students and researchers from other countries, visit the palace to study its historic importance.

However, due to the palace’s long closure, a significant number of bats have taken up residence on the ground level, and scorpions and snakes have turned it into a ghost bungalow. Students from the Islamic University of Bahawalpur paid a visit to the palace and voiced their opinions.

Locals, visitors, and experts are encouraging government agencies, as well as the UN and international agencies, to take the required actions to conserve and repair this historic treasure, as well as the status of the roads leading to it, from further devastation. For decades to come, only photographs of this old palace will be discovered in books, like withered flowers if timely action was not taken.

There was apparently a large library in this palace that held up to 20,000 books, but they no longer exist. Experts believe that if the palace is rebuilt and opened to the public, it may be easily repaired using money collected from visitors in the form of tickets.