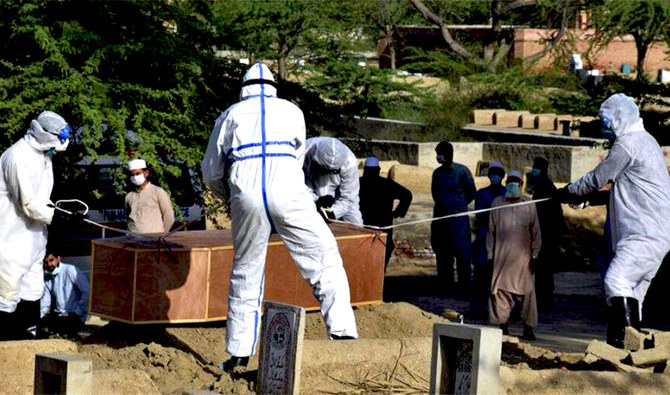 The overseas Pakistanis suffered heavily due to the Coronavirus pandemic. While thousands had lost their livelihoods due to the prolonged lockdowns and travel bans as a fallout of the pandemic, a significant number of Pakistanis expats had contracted the deadly virus and many of them had also lost their lives to it.

Many of the expats found it quite difficult to deal with relatives and friends who died of the disease. The unexpected death of the relatives in another country, was no doubt, a great tragedy, however, the shifting of the deceased’s bodies to home was another challenging task.

According to the Foreign Office, as many as 1259 Pakistani expats have fallen to the coronavirus between February 26 and the end of July 2020, however, only 123 dead bodies could be brought to Pakistan, while the rest had been buried in the countries of their residence.

The family of a Pakistani expat Sher Zameen, who died of coronavirus in Saudi Arabia, faced many difficulties while shifting his dead body to his native village Shahtoot in district Shangla. Sher Bahadar, maternal uncle of the deceased Sher Zameen told TNN that the documentation and clearing process was very complicated.

“The Saudi authorities were not cooperating. I had been made to move from one office to another as they were referring the matter to one another. Problems were created in the hospital which wasted lot of our time. As a result, we missed a flight. The Saudi authorities did not allow us and we were stranded at the airport for two days. After some hectic efforts, we were able to arrange fresh tickets and eventually, the dead body was handed over to the airline authorities at around 8:00pm,” Sher Bahadar continued.

He said the government didn’t extend any kind of help in the whole process. “Even the ambulance for the shifting of the body was not provided by the government. We contacted Al-Khidmat Foundation, a non-governmental organization, for the purpose and it provided free of cost service,” Bahadar further informed.

The overseas Pakistanis have been contributing a lot in the development of the country by sending billions of dollars remittances every years, however, politicians from the opposition benches and the expats themselves complain that the overseas Pakistanis receive little or no help from the authorities as the coronavirus pandemic spreads among Pakistani laborers in the Gulf countries. The opposition politicians did raise the issue on different fora.

Talking to TNN, Awami Naitonal Party (ANP)’s provincial general, Sardar Hussain Babak laments that the federal government failed to help the Pakistani expats in bringing back the dead bodies of those who died in Saudi Arabia, UAE or other Gulf countries.

“Our expats were looking at the Foreign Office but unfortunately, the government miserably failed in dealing the situation. It couldn’t help them in timely transportation of the dead bodies to the country,” he observes.

Babak adds that the poor laborers were forced to buy air tickets on exorbitant rates during the corona lockdown. “The tickets were hiked up by 200 to 300 percent and that too, were available on reference only. Buying tickets on such exorbitant rates was beyond the reach of the poor laborers and that is why the dead bodies were laying in their apartments for days,” he says.

Niaz Khan, a Dubai-based social worker also complains that the government didn’t support the expatriates during the lockdown.

Khan belongs to Shangla district of the Khyber Pakhtunkhwa and he helped out many Pakistanis in evacuating the dead bodies of those died during the lockdown.

“There were plenty of problems,” Khan remarks while talking to TNN about his efforts in shifting the dead bodies to Pakistan from the Gulf state.

“The flight operation was suspended. The consulate officials were not extending any sort of help. The mortuaries where the dead bodies were stored, were heavily guarded. The local authorities were burying the deceased on their own and were not allowing anyone to say final farewell to their relatives. They were only allowing them to see the deceased from a slight distance,” Niaz Khan maintains.

The Pakistani diaspora residing and working in the Gulf countries and their relatives have urged the Pakistani government to take practical steps to mitigate the problems faced by them.