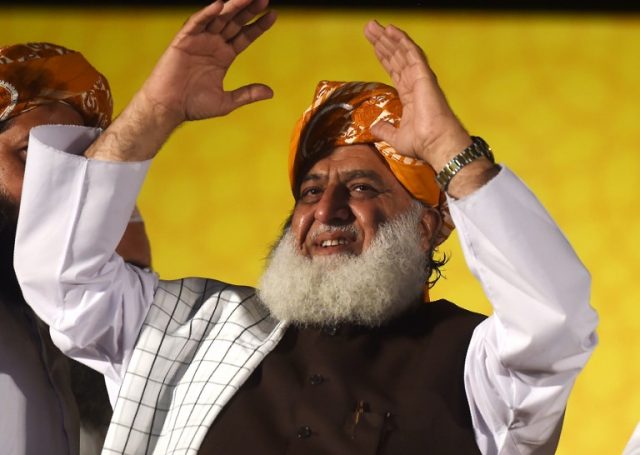 PESHAWAR: Jamiat Ulema-e-Islam-Fazl (JUI-F) chief Maulana Fazlur Rehman on Saturday said that the opposition parties are getting united to topple the Pakistan-e-Tehrik-e-Insaf government in the country.

“All the opposition parties – Pakistan People Party, Pakistan Mulsim League-Nawaz, JUI-F and others – are now getting united and are ready to send the Pakistan Tehreek-e-Insaf (PTI) government packing.” JUI-F chief said while talking with with a private TV channel. He said that the opposition is getting united, because of the condition created by the ‘incapable’ rule of PTI.

He alleged the Pakistan Tehrik-e-Insaf (PTI) government has failed to run the country and the opposition parties are no more ready to tolerate the government.

“We will dissolve this government. We cannot give any more time,” said the Maulana while talking to the private Tv channel. He alleged the Imran Khan’s government is working on Jewish agenda and planning to recognize the state of Israel. The Maulana has warned that any bid to make the country a secular state would be opposed strongly

Maulana Fazal from the day first is strict opposition the PTI government alleging it has been imposed on the people through fake elections. However, the opposition parties wanted to give time to the government. Fazal is alleging that the general election was a drama and giving the PTI a time, so would be tantamount to accepting the fake elections.

He accused the chief of PTI as a ‘puppet’ of the external powers. He said that the PTI leader has raised voice for recognising the state of Israel, however, when the religious parties protested, he backtracked from his stand.

Talking about possible changes to the 18th Constitutional Amendment, Fazal ruled out any possibility of it being revoked as they opposition will not allow them any changes while the governor benches have no enough strength in the assembly to bring any constitutional change. Maulana maintained that even if the government tries bringing any such change, the opposition parties consider it a ‘selected government’ and will never be ready for an event set with them on negotiating table.  The JUI-F leader while talking about the role of the National Accountability Bureau said that it has been used for political victimization by the ruling party.