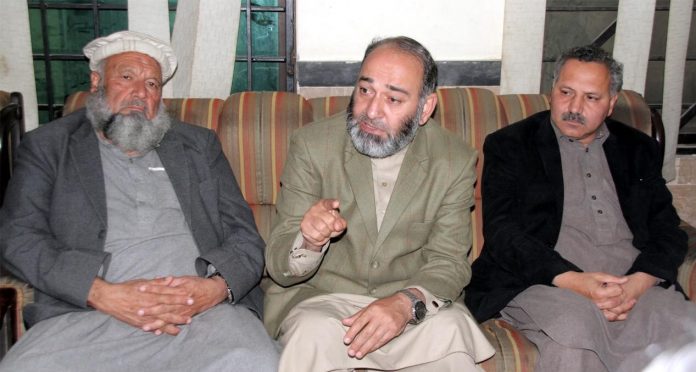 PESHAWAR: The provincial chief of Jamaat-e-Islam Mushtaq Ahmad Khan on Friday strongly criticized the federal and provincial governments for allowing Governor Shah Farman to exercise authority over the affairs of Tribal districts.

Governor Shah Farman on Thursday triggered a controversy by forming a body to advise the provincial government on issues arising out of the tribal region’s merger with the province. The legal experts maintained that after the passage of 25th amendment the constitution, the governor has lost all his powers to interfere in the affairs of merged districts.

But against the law, he presided over a high-level meeting in which Chief Minister, Corps Commander Peshawar, KP Finance Minister, KP information minister, the Advocate General of the province and other senior government officials participated.

The critics believe that as the Chief Minister is the Chief Executive of the province, he should deal with all the issues of the transferred districts, however, it was alleged that the Governor is still treating the tribal districts as former Fata.

“Neither constitution nor rules of business allow him to interfere into the affairs of tribal districts,” said the JI Chief.  He added that it is like an ‘election rigging’ and has only deceived the tribal people in the name of reforms. He added that despite claims of reforms the tribal areas are still treated like FATA which is very unfortunate. “Despite the claims of reforms, the people of tribal districts are still deprived of their basic rights,” said Mushtaq Ahmad Khan.

He was addressing media after the oath-taking ceremony of Jamaat-e-Islami’s social media team here in Mardan. The JI provincial chief has also criticized the federal government for the withdrawal of subsidy on Hajj adding that it will deprive the low-income people of performing Hajj.  He also accused the government of inflation and putting the country further into economic crises.