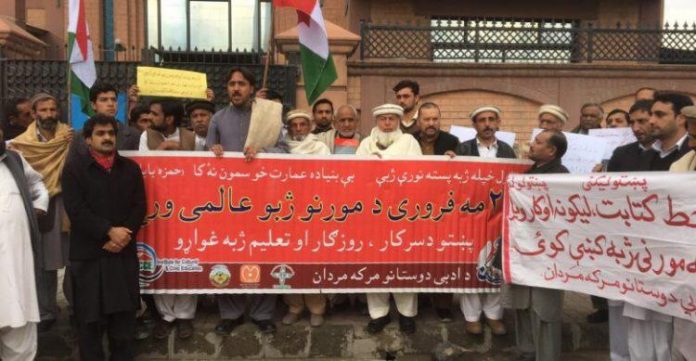 NOWSHERA: Participants of rallies on the International Mother language day stressed on the need to impart education in the native tongue on Thursday.

The International Mother Language Day is being observed all over the world on February 21 with the aim to promote linguistic and cultural diversity. It’s objective is to preserve and protect all languages used by people all over the world.

The theme for the current year is ‘indigenous languages as a factor in development, peace, and reconciliation’.

Pashto writers and activists also observed the day and asked for respect for all the indigenous languages of the country. The writers and activists asked the government to make efforts for the preservation of dozens of indigenous languages that are on the verge of elimination in Khyber Pakhtunkhwa and Northern areas of the country.

In Nowshera district, progressive writers association and Pashto cultural society arranged a walk from Shobra Chowk to Press club, asked the government for the preservation of Pashto language and making it the medium of education in the province. Led by Abid Ali Khattak and Roohullah Durrani, the participants of the rally were holding placards inscribed slogans for the Pashto language. They claimed that their aim is to raise voice for mother languages and to show the world that we have a number of historical languages in our country.

The participants of the rally said Pashto is centuries old language; therefore, it should be made the medium of education in the province. They maintained that unfortunately, after 1947, the Pashto language couldn’t make proper progress due to extra importance being attached to the English language.

The activists said that an alien language in the form of English has been imposed on us due to which learning has become a big problem. All the languages, whether it is Pashto or Punjabi, have been kept under the dominance of English Language.

The rally participants lamented that today they are seeking freedom for their languages as all around the world, the basic education is being imparted to children in their mother language, as it fulfils the real purpose behind the education. They added that education in the English language put the extra burden on children while in education in one own language can create a better understanding of culture and civilization.

The rally arranged under the banner of PkMAP, asked the government to make mother languages as the medium of education. “Every person has the right to get the education in the mother tongue,” said Advocate Akbar Hoti, Pashto poet. “After the passage of the 18th amendment to the constitution of Pakistan, it is the subject of the provincial government to declare mother language as the medium of education.”

Thus he asked the government that not only Pashto but also Hindko and other languages being spoken in the province be made the medium of instruction.