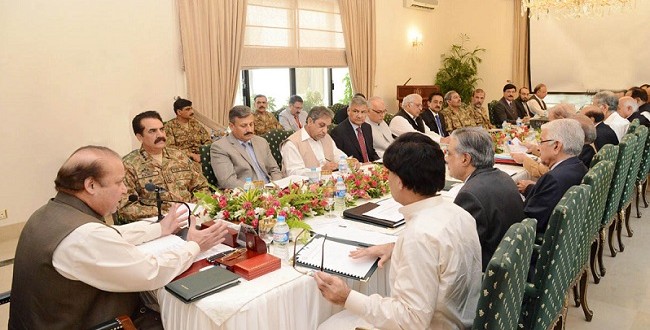 PESHAWAR, 16 August: The federal government has set up a committee for implementation of the National Action Plan (NAP) to counter terrorism.

A high-level meeting was held in Islamabad in this regard on Monday which was chaired by Prime Minister Nawaz Sharif and attended by senior civil and military officials. The meeting reviewed progress on the NAP and ongoing operation Zarb-e-Azb and decided to establish 39 wings of the civil armed forces for border management.

According to a statement of the Prime Minister House, the committee to implement NAP will be headed by National Security Adviser Lt Gen (R) Nasser Khan Janjua and will include federal secretary interior and home secretaries of provinces, director general National Counter Terrorism Authority (NACTA), chief secretaries of all provinces, police chiefs and the Prime Minister House secretary.

The NAP was made after terrorist attack on the Army Public School and College in Peshawar. However, it was not implemented fully in letter and spirit.