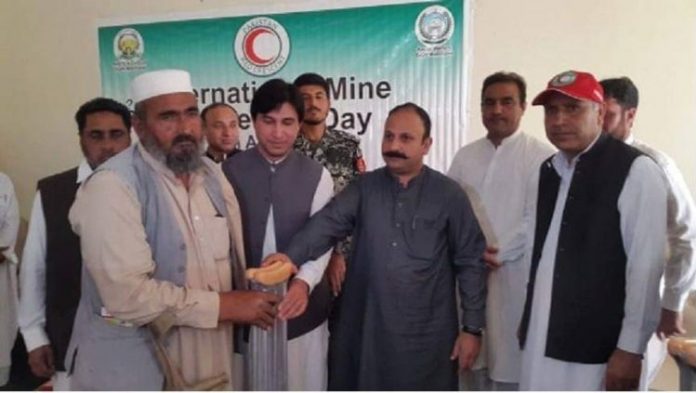 GHALLANAI: A function was arranged at Bhai Dag Complex in Baizai sub-division of Mohmand tribal district in connection with International Mines Awareness Day (April 4) on Friday.

The function was arranged by Pakistan Red Crescent Society (PRCS) which was attended by government officials, representatives from the district sports department, social welfare office, civil defence and local elders.

Chief guest Additional Deputy Commissioner Syed Saiful Islam, PRCS Mohmand branch secretary Fauzee Khan and other speakers said on the occasion that the purpose behind observing the International Mines Awareness Day is to create awareness among the people about the dangers of explosives and landmines and suggest ways and means to avoid damages and mishaps. They urged the teachers to arrange awareness programmes in their schools to give awareness to students about this important issue.

Fauzee Khan said the PRCS provides artificial limbs to the victims of mine explosions. He said this programme will be extended to other tribal districts soon. The area residents appreciated the efforts of the PRCS for welfare of the people.

At the end of the function, ADC Syed Saiful Islam distributed crutches and other gifts among the victims of landmine blasts. Those who received the gifts thanked the PRCS for its generous gesture.

The matter of mines is a very pressing issue in the tribal districts as it has caused many damages. After the return of the temporarily displaced persons (TDP), several incidents of landmine explosions occurred in the tribal districts which caused many casualties. The militants while leaving the region after the military operation planted several landmines which have trapped several people so far. This led of an uneasy situation in the region and people are demanding clearing of these landmines. Hundreds of landmines have been removed from the tribal region for which the local population has thanked the security forces.

Speakers at these functions urged the government to focus on the rehabilitation and treatment of those who had lost their limbs in landmine blasts or other such incidents. They also stressed the need for joint efforts to educate the people about the dangers of mines.