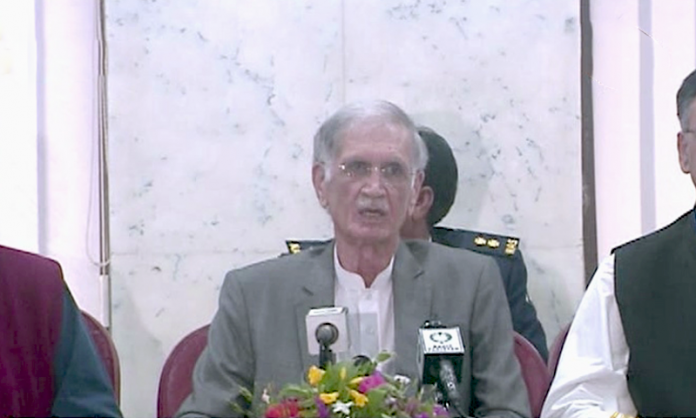 PESHAWAR: The government has decided to move the court over a ‘provocative statement’ by Jamiat Ulema-e-Islam-Fazl (JUI-F) chief Maulana Fazlur Rehman during his address to the Azadi March participants.

Fazlur Rehman during his speech at the Azadi March on Saturday had stated that the writ of the government has ended now and they will run the government now by arresting the prime minister from his house. A day earlier, he has asked the ‘institutions’ to stay neutral.

Defence Minister Pervaiz Khattak, who is head of the government’s core committee constituted for talks with the Rahbar Committee of the opposition, said at a press conference along with other members of the committee Asad Umar, Shafqat Mehmood and Firdous Ashiq Awan that the Maulana will be taken to court over his statement to take Imran Khan’s resignation forcibly. He said the statement of the Maulana tantamount to mutiny and inciting people towards a wrong path.

Pervaiz Khattak said the Maulana is not sticking to the agreement of Rahbar Committee with the government. He said the doors of talks are still open. However, he ruled out the resignation of Prime Minister Imran Khan.

Pervaiz Khattak lamented that those who opposed the use of politics for religion are now also seen on container along with the Maulana. He played down the incident of waving of Afghan Taliban flag by someone in the Azadi March gathering, saying that some elements want to create anarchy in the country. He said the institutions have always supported democratic governments in the country.