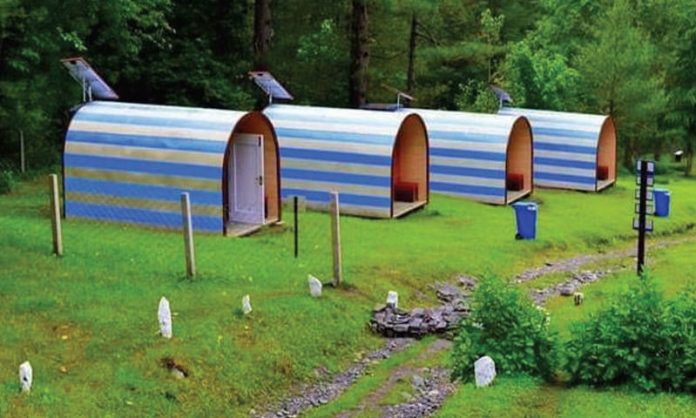 PESHAWAR: For the promotion of tourism and providing best facilities to the tourists, the KP government has will inaugurated camping pods in set up in different scenic valleys of the province.

Talking to the media, Managing Director Tourism Corporation Junaid Khan said that two to four beds camping pods and tent Villages in several tourist attractions, including Bishigram in Swat, Sharan in Kaghan, Thandiani in Abbottabad, Yakh Tangai in Shangla and Sheikh Badin in Lakki Marwat have been renovated and will be opened during Eid and onwards for the tourists throughout the tourism season.

Junaid said a Camping Pod could accommodate 40 to 50 tourists at a time, who can avail every facility including security, a playland for kids and kitchen. He said that this year the number of tourists would be great as provincial government had also provided other facilities including parking lots, washrooms, kids playing areas and tent villages to the tourists at these resorts.

The project themed as ‘camping paradise’ is aimed at initiating an environment-friendly activity at the grassroots level to promote domestic tourism, generate income for the local population, as well as create opportunities for healthy recreation that is in consonance with the local heritage and culture.

Five sites, including Thandiyani in Galyat, Sharan, Seer, Mahdan and Baisal in Kaghan valley, have already such facilities and such project would be later launched in 30 other tourist sites of the province.

The Pods, Junaid Khan said, are the best residential as well as recreational and enjoyment facilities for the families. They are either consisted of two or four bedrooms with washroom, kitchen, children’s play areas, parking lots and bonfire. There are also tent villages for enthusiasts of adventure tourism.

He said Prime Minister Imran Khan had a brief stay as well in the Camping Pods in Naran and is very keen to have these facilities for both the local and foreign tourists along with foolproof security.