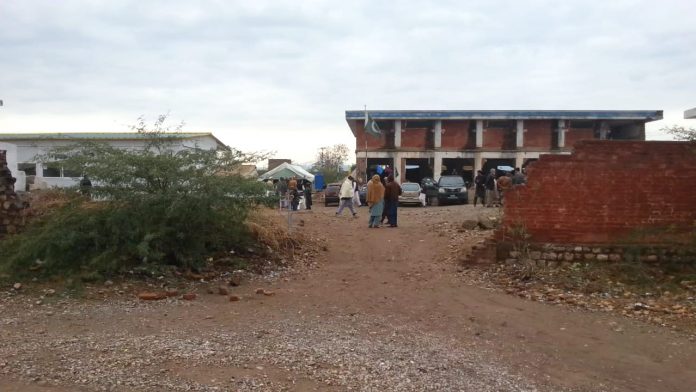 The school was constructed as a primary school in 1913 by the British government. It was blown up by militants with explosives in 2009 damaging it beyond repair. The local people for long have been demanding for the reconstruction of this historical school.

However, according to the government policy, 9 kanal of land is required for the construction of higher secondary school and in case of Alam Gudar high school, it had only five canal of land.

An elder of Sipah tribe, Malik Halim Gul donated five Kanal of his piece of land to the school thus the total area covered by the school is now 10 kanal which is more than land requirement for higher secondary school. District Education officer Jadoon Wazir, Assistant education officer Abdul Nawaz, sub-engineer of communication and works Hashim was also present on the occasion.

Amir Fahim, a resident of the area, claimed that he is the owner of the property, where the school building is constructed. Therefore, he warned that he would stop the reconstruction work if his family members were not employed in the schools. “I am the owner of the land but it has not benefited me even a single penny,” said Amir while talking to TNN.

Amir said that he has not signed any contract with KP government to construct the school on the property. Fahim claimed that he has won the case at the court of Political agent as well as at the commissioner FCR tribunal, but the education department is not ready to provide him with his right.

In tribal areas whoever donates land to the government for construction of school or medial facility, he/she shall have the right over the jobs of class IV sanctioned for the facility.

This policy, in most of the cases, creates conflicts among families over jobs who had donated their shared land for the construction of health or education buildings.