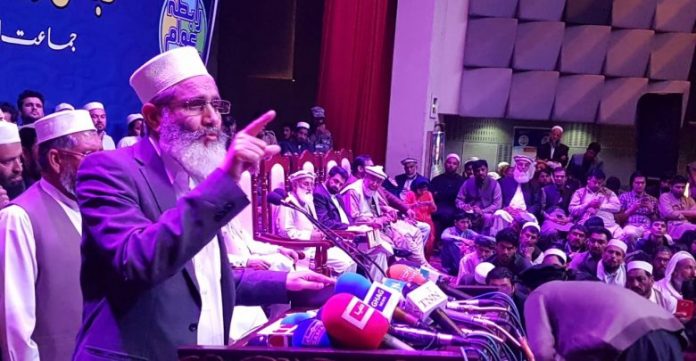 PESHAWAR: The Jamaat-e-Islami (JI) ameer Senator Sirajul Haq has asked the party’s provincial leadership to establish contacts with all the parties for the rights of the people of Khyber Pakhtunkhwa and tribal districts.

Addressing a tribal workers convention at Nishter Hall in Peshawar on Sunday, Sirajul Haq said the government had made several promises with the people of erstwhile Fata in the name of reforms, but these promises remain unfulfilled. He said the government is yet to act on the promised massive development package for the tribal areas, 3 percent share in the National Finance Commission (NFC) Award and provision of jobs to the tribal youth.

The JI chief said the people of the tribal districts have always offered matchless sacrifices for the country. However, he said, the government has given them nothing in return. Sirajul Haq said the tribesmen had assured Quaid-e-Azam Muhammad Ali Jinnah to protect the western borders of the country without any salary, and they are fulfilling their promise for the last 70 years.

Sirajul Haq expressed grave concern over the fact that there is no university for tribal students and people cover distance of hundreds of kilometres and bring their patients to Peshawar under very difficult circumstances. He said the people of tribal districts deserve better education and healthcare facilities in their own area. He said it is the responsibility of the government to provide jobs to the tribal youth so that they could contribute positively to the society.

Sirajul Haq also criticised the provincial government for its failure to complete the Bus Rapid Transit (BRT) project in Peshawar within the stipulated time.