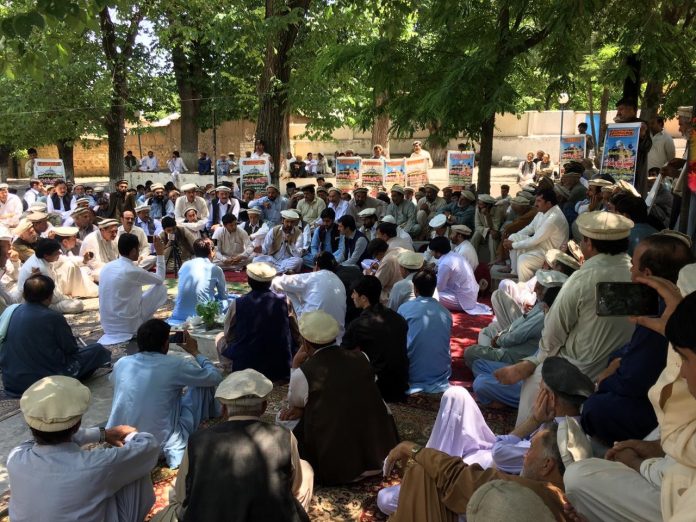 PARACHINAR: A grand the Jirga of Kurram tribal elders in Kalaya asked the government to open the shrine of Mir Sayyed Anwar Shah Sayd Mian for devotees and sought permission to renovate the building of the shrine.

The Jirga formed a 40 member committee to discuss the issue with the KP government and the security forces to allow the devotees to access the shrine building without further delay.

The Jirga was held in Kalaya Headquarter in which the elders from Orakzai and district Kurram participated. Some of the participants were also holding placards inscribed with slogans for their right to have access to their Sufi elder without any restriction. Former Senator Najmul Hasan, Syed Fakhar Abbas of Badshah Anwar Ghag committee, Sayed Jamil Hasan, Dr Mukeel Shah, Malik Ihtiyar Ali and other elders addressed the Jirga members.

The Shrine was closed for devotees by the security forces during the volatile law and order situation of the area. They said that now with the efforts of the security forces, peace has already been restored throughout the country, therefore, they should also be allowed to visit the shrine. The committee was tasked to raise the issues with the chief minister, the President, the prime minister and chief of the army staff of the country.

Last month, they have also held a protest outside the Parachinar press club asking the government that it is the duty of government to provide security and allow the people to follow their religious freedoms without any fear and restrictions. They had warned the government that they will no more tolerate the ban on their entry to the site and asked them to immediately open routs to the shrine.

The provincial minister for health, Hisham Inamullah Khan, has talked to the protesters and ensured them that the issue will be raised with high officials and will be resolved.
He had asked them that it is his desire that they the ban in the shrine should be left at once and the people should be allowed to visit the shrine.