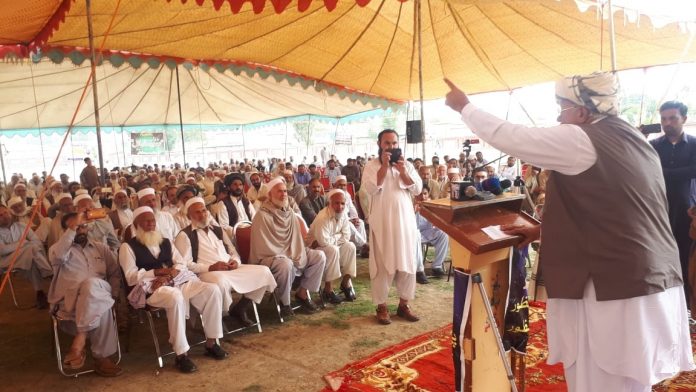 GHALANAI: The grand jirga of tribal elders on Saturday strongly criticised the federal and provincial governments for the merger of tribal districts with the province in ‘haste’. The elders from across the tribal districts were gathered at Ghalanai sports stadium.

The elders maintained that almost one year of the merger has been completed but so far the government has made only announcements and no practical steps were taken for the benefits of people, who are deprived of their basic rights for generations. The grand jirga pledged that they will continue to struggle for a separate province. They asked both the provincial and federal governments to hold dialogues with them and prove that the merger has been made in the best interest of tribal people.

They alleged that they have been subjected to an undemonstrative attitude by the federal and provincial government as every decision is being imposed on them from the top without their consent, which, they said, is undemocratic and not acceptable to them.

The jirga also criticised the launch of regular courts in tribal districts and said throughout their lives they have solved the issues and disputes through mutual dialogues and jirga system. They said that the courts have been imposed on them undermining jirga system which is a basic part of Pakhtuns’ culture and traditions.

They accused the government that before the merger of tribal area with the province, its inhabitants were not taken into confidence. The maintained that as a democratic country, they should have been asked wither they want to join the province or want to remain an independent province.

They pledged that tribal elders will continue their struggle for a separate province and asked the government to hold dialogues with them and prove that the merger is in the largest interest of tribal people.

They also announced that they will fully participate in the million march of Jamiat Ulema Islam Fazal (JUI-F) at Baba-e-Khyber, Jamrud, on April 21.