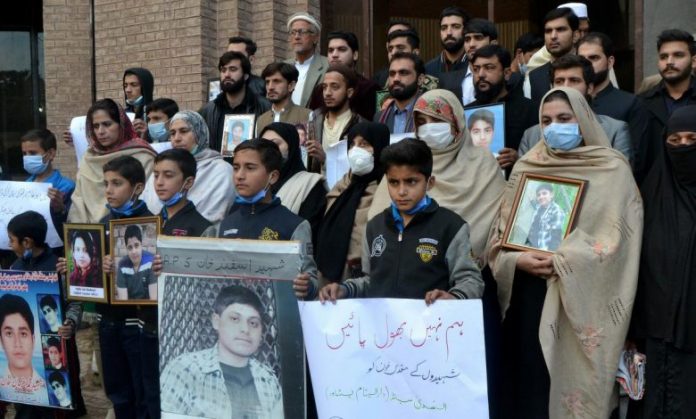 PESHAWAR: On the sixth anniversary of the Army Public School (APS) terrorist attack, the mothers of all martyred students were in tears, but there was a woman who appeared to be in deeper grief and pain than others.

The 40-year-old woman had lost her two sons on the same day which is considered the most tragic day in the history of the country. In the most heinous and brutal terrorist attack in the history of Pakistan, 147 innocent students and staff members were martyred in the APS on December 16, 2014.

At the main ceremony in connection with the APS attack anniversary in Peshawar on Wednesday, the relatives of the martyrs offered Quran Khwani for the departed souls and also demanded making all the people responsible for the attack accountable.

The mother of two martyred brothers, Saifullah and Noorullah, was apparently listening to these talks, but in fact she as usual was soaked in the memory of her sons.

While talking to TNN, the unfortunate mother revealed that she had no other male children other than Saifullah and Noorullah. “They were in 9th and 10th grade in APS. I sent them to school after preparing breakfast for them, but they did not return alive,” she said with teary eyes.

“I am living a meaningless life after my sons’ death. I fell like by my heart will come out of my body when I think about the pain which my children endured,” she said.

The mother of the martyrs said there can be no compensation for children’s life. She said a mother endures every difficulty for her children and seeing them growing up is like oxygen for parents. She said her daughters always ask questions about the death of their innocent brothers, but she had no answers.

“Our every discussion begins and ends with my martyred children. It would be right to say that the grief of my young sons’ death has buried us alive,” she said.

Shaheed Hassan Khan’s younger brother Arooj Khan also attended the anniversary gathering. He said it is impossible to forget about his martyred brother. He said his brother was in 10th grade when he was martyred.

“All our cousins of Hassan Khan’s age have grown up now. When I see them, I remember my brother and think he would have also grown up like them if he were alive today,” said Arooj.

Hassan Khan’s mother said the terror of the APS attack day will never go away. She said people give a lot of respect to the parents of APS martyrs and express sympathy with them, which gives them some courage. “The pain of APS carnage will stay with us until we are alive,” she said.