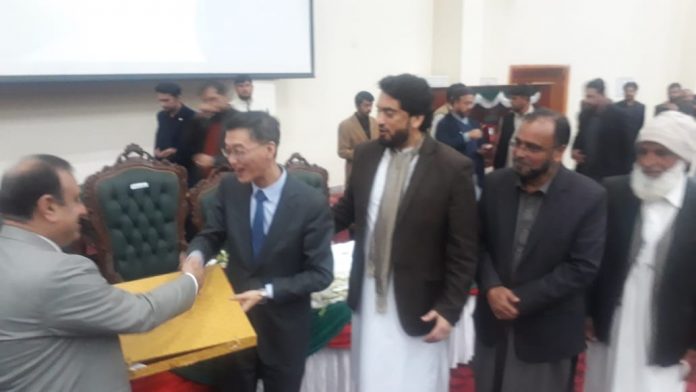 KOHAT: Minister of State for Interior Shaharyar Khan Afridi along with Chinese Ambassador to Pakistan Yao Jing on Friday laid the foundation stone of Centre for Research at the Kohat University of Science and Technology (KUST).

Speaking on the occasion, the minister announced 20 scholarships for KUST students and 50 short courses for the faculty members. He said Pakistan and China have brotherly ties which are getting stronger with passage of time. He said Pakistan’s friendship with China is a role model for others.

He said the foreign forces wanted to turn Pakistan into a battlefield, but the resilient Pakistani nation foiled all conspiracies and defeated terrorism and extremism by rendering matchless sacrifices. He said the enemy conspired to make Pakistanis fight with each other, but they failed in their nefarious designs. He said the Pakistani nation is united and will foil all conspiracies against the country. He said propaganda was also made against the institutions of the country, but that didn’t work either.

Shaharyar Afridi said Prime Minister Imran Khan has been recognized as the messenger of peace at international level. He said critics used to mock Imran Khan for his ideology of peace and he was also called Taliban Khan, but now people have realised the importance of peace and talks. He said the importance of Pakistan in regional peace cannot be overlooked. He said the world community has realised that Pakistan cannot be bypassed.

The minister said visa policy has been relaxed to promote tourism. He said increased tourism will boost the economy of the country.

Shaharyar Afridi said the merger of tribal areas with Khyber Pakhtunkhwa will open new opportunities for development. He said the people of the merged district will now get all their rights.

The Chinese ambassador expressed good wishes for Pakistan and appreciated their sacrifices in the war against terrorism. Shaharyar Afridi and Yao Jing also cut the cake of New Year.