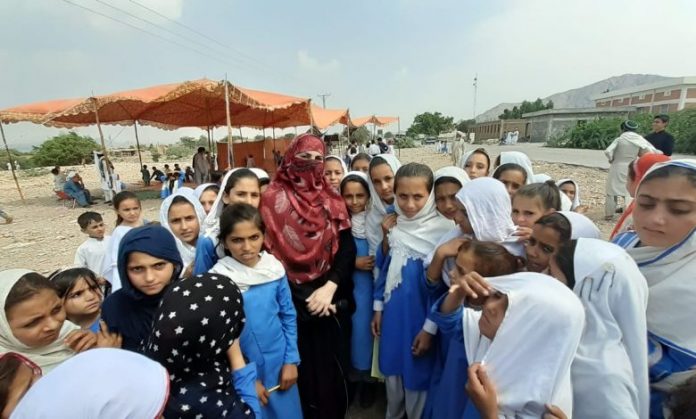 WANA: Eleven years old Manahil’s dream of getting education was shattered the day when her parents decided to discontinue her schooling and urged her to focus on learning domestic skills instead.
Like many other people in the Tiyarza tehsil of South Waziristan tribal district, Manahil’s parents thought she was a grown up girl now and according to their understanding and local traditions, it is unsuitable for a girl of her age to continue schooling.
“It was my utmost desire to get education and serve my people but alas! I couldn’t materialize my dream,” Manahil said while talking to this scribe.
“I used to go along with my brother to school. Both of us were studying in four grade. He is still going to school but I was forced to quit education. My parents insisted that I should focus on learning domestic skills,” she revealed.
In South Waziristan, Manahil is not the only female student who had quit education. There are many such girls, who, despite having great urge for education, are being forced to discontinue schooling.

Aurangzeb Barki, a social activist from Kaniguram, says majority of the people do not allow their female children to go to school once their get older than 12 years of age. “At this age, the parents usually start thinking about their marriage,” he adds.
“In tribal traditions, people deem it against their culture and honor to allow girls go outside their homes, he explains and suggests that government should build separate institutions for girl students so that they can get education without breaching their tribal codes. “Only this way, the tribal people will be encouraged to allow their daughters get education without any resistance,” Barki maintains.
Barki’s views have also been endorsed by a female teacher of a government primary school in Tawda Cheena area.
“I had about 50 girl students in my class before the schools were closed due to the fear of Corona virus spread in the country. When the schools were reopened following relaxation in the lockdown, the strength of the students has shrunk to only 20,” Sameena, the school teacher informs TNN.
“The girls were very optimistic about their future. They use to inspire one another. Some of them vowed they would become doctor. Others were determined to become engineers. Whenever I listen to them talking like this, it was music to my ears,” Sameena recalls.
“It will be a great achievement if we adopt a pluralistic approach by changing the perception and mindset of the local people that girls’ education is as important as that of boys’,” she keeps on saying.
According to the statistics of the local education department, there are 745 schools in the entire district out of which only 280 are for girls. Apart from this, there are also 75 community schools in the tribal district.
District education officer Qadeem Khan admits that Corona pandemic had drastic effects on education as lot of time of the students has been wasted due to closure of the schools.
“I am trying hard to visit each and every school in the area and emphasize teachers to focus to students’ education. I am also working on constituting Parent-Teacher Committees to ensure a close liaison among the teachers and the parents. We will leave no stone un-turn to persuade parents to educate their children come what may. We will also use media platform to convince the parents,” Khan adds.

As a ray of hope, there are some people who act as a catalyst in breaking the stereotype by supporting girls’ education. One among such people is Shahid Khan, a resident of Tiyarza tehsil. Shahid has five daughters and all of them are going to school.
“People have been hounding me not to send the girls to school but it does not bother me. I argue with them that our religion Islam has made it mandatory for both male and female to seek knowledge, how can we deprive girls from their right,” a confident Shahid remarks.
As per school teacher Sameena’s assessment, girls in South Waziristan are equally talented and they can excel in every field of life. The only thing we should do is to change the perception of the tribal people.